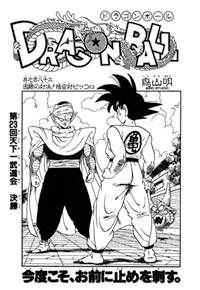 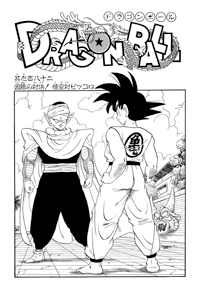 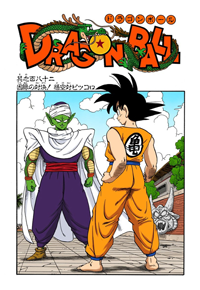 Piccolo laughs about having sealed away God, as the announcer counts down on Shen (the human body was left lying down face first once God flew out of it). “…Nine…Ten!! He can’t get up!!! Ma Junior has won with that mysterious technique!!! He’s advanced to the finals!!” Goku can’t believe he’s trapped God in that bottle, as the announcer goes over and wakes up the nerd.

Everyone claps for the nerd once he stands up, and he asks the announcer if he was just in a Tenka’ichi Budōkai match. The nerd struts back into the audience, thinking he must’ve drank some sake. And then the nerd’s kid compliments his daddy on how strong he was. The announcer says there’ll be a ten minute break before the grand finals kick off, and so Piccolo heads backstage, as does Kame-Sen’nin.

Goku tells Piccolo to hand over that bottle once he gets back there, but naturally, Piccolo refuses. Instead, Piccolo swallows the bottle, and says he’ll have to kill him to get it out. Although, killing Piccolo would also kill God, so… Piccolo walks off, laughing about having the upper hand, and then Kame-Sen’nin shows up.

Kame-Sen’nin asks Goku what’s going on, and then Tenshinhan also wants to know, that Piccolo is too strong to be an ordinary member of the Demon Clan. “That guy… is Demon King Piccolo…” Tenshinhan can’t believe that, since Piccolo should be gone, and Goku says he did defeat him. Chi-Chi then realizes Goku was the one who rid the world of Demon King Piccolo.

Goku relays what God had told him about Piccolo putting out an egg just before he died, and Piccolo was born from that egg. He’s mostly the same as the previous Piccolo, except that he’s far stronger. Yamcha and Tenshinhan bring up seeing Piccolo fly out of Shen’s body when the Mafūba was used, and Goku says that person wasn’t Piccolo. It was God borrowing a human’s body in order to fight Piccolo.

Goku then explains how God and Piccolo were once one person, and that the evil God expelled from himself turned into Piccolo. Therefore, if one is killed, the other dies as well. Everyone wonders what to do now, with Goku seeming to be the last resort, and then Piccolo interrupts them. He starts talking crap, and says how great it’ll be in his demon world once he wins.

The announcer then calls Piccolo and Goku out for the finals, and Piccolo threatens Kuririn on the way out. Goku heads out to the ring, and Kuririn’s freaked out about how carefree he is with the fate of the world at stake. Piccolo asks Goku if he’s prepared, and Goku asks for what. “Prepared to die, of course!” Piccolo has thrown off his mantle, and Bulma and Lunch cheer Goku on. “Please begin the finals of the Tenka’ichi Budōkai!!!” 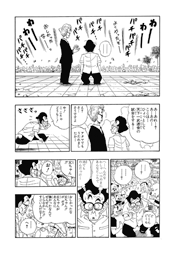 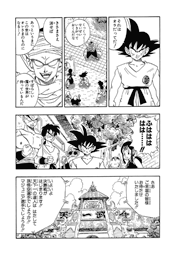 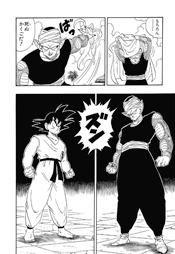