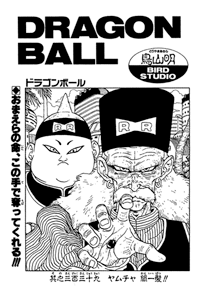 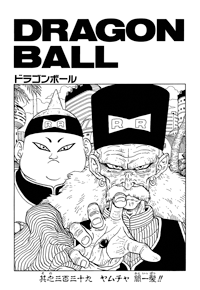 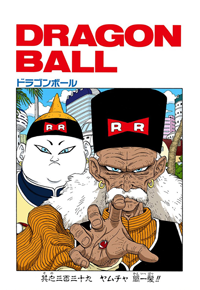 A Close Call for Yamcha!!

No. 20’s arm is through Yamcha, which he eventually pulls out. Goku notices something, Tenshinhan says that a large ki is dropping quickly, Kuririn think it’s Yamcha, and then Piccolo flies off. (All of them are talking to themselves and in different places) No. 20 still has his left arm on Yamcha’s mouth, when Goku, Piccolo, Tenshinhan, and Kuririn arrive. No. 20 finally drops Yamcha. Goku tells Kuririn that Yamcha’s still alive, and asks him to take Yamcha to the spot from earlier and feed him a senzu. Kuririn agrees, and flies off with him. Piccolo says they must be the artificial humans and is glad they’ve finally shown their faces. No. 20 thinks it’s odd that they know they’re artificial humans and that they knew they’d be here, and asks them to explain this. Piccolo suggests they try to take the answer by force, and No. 20 says he will. Goku says they should first go somewhere where there aren’t any people, and asks the artificial humans if that’s okay with them. No. 20 says that’s fine, but they don’t have to go anywhere for that. No. 20 suddenly begins blowing up a huge portion of the city with eye lasers. Goku yells to stop, then flies in and punches him, knocking his hat off.

In the meantime, Yamcha has been healed up on the plateau with Kuririn, Gohan, Yajirobe, and Bulma, and they all notice the destruction in the city. No. 20 puts on his hat and says he’s made a place with no people, but this doesn’t seem to be suitable. Goku gets pissed and yells at them to come with him and get their asses kicked, and No. 19 says, “We can’t be defeated by you.” But No. 20 says he’ll follow him, “Choose the place you’d like to die, Son Goku.” Everyone wonders how he knows Goku’s name, and No. 20 says he knows their names as well; Piccolo and Tenshinhan. Goku notices some people down the street, and says they’ll find out later, but should go now. Goku flies off, followed by No. 20 and No. 19, and then Piccolo and Tenshinhan. The others on the plateau notice they’re leaving, and Kuririn realizes they’re just changing locations. Yamcha says, “This is bad!! If I don’t tell Goku and everyone…!! Then they’ll all have their power absorbed…!!!” 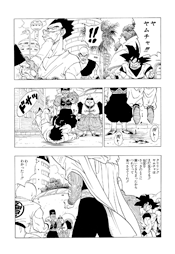 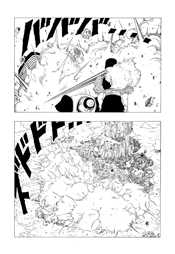 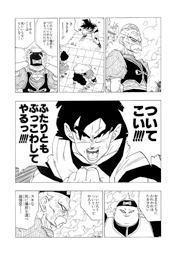