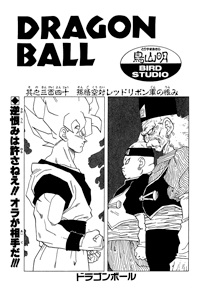 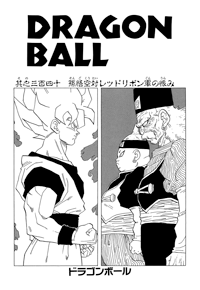 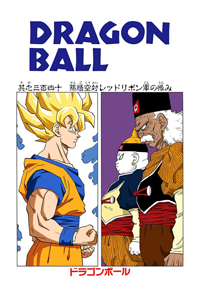 Goku and everyone are flying through the air, and Kuririn asks Yamcha what he meant about their power getting absorbed. “What happened? I don’t know, but just by grabbing me, my power rapidly turned to nothing.” Bulma thinks Doctor Gero must’ve invented something amazing. Gohan says he has to hurry and tell them, and flies off. Kuririn follows suit, to bring them the senzu. Yamcha says they don’t understand, and also follows along, knowing that he can’t do anything but watch. Then Bulma looks at Yajirobe and asks if he’s going also. Yajirobe emphatically says he’s not going. Bulma wonders out loud about hearing how strong Yajirobe is, and that surely at a time like this one more strong person would be a great help in saving the Earth and his friends. Yajirobe meekly responds he supposes so, and Bulma yells at him for being so impassive. “Don’t you feel anything?! You’re the worst!!!” Yajirobe says it’s not his fault, he can’t fly.

No. 20 tells Goku this is far enough, and thinks this place will suit their needs. The artificial humans land, and it’s a rocky desert place with lots of small mountain, and the rest of them land as well. Piccolo thinks he chose this place to possibly hide behind the rocks. Goku, panting, tells them to explain how they know so much about them now. No. 20 says okay, but thinks they might regret hearing it. Tenshinhan wonders why Goku’s so out of breath, since all he did was fly. No. 20 starts to explain. “Son Goku… We have thoroughly been spying on you. Using super-tiny insect-style robots… During the Tenka’ichi Budōkai, during the fights with both Piccolo and Vegeta… In other words, ever since you destroyed the Red Ribbon Army, we continued to research you. To defeat Son Goku somehow or other… Perhaps some sort of artificial humans could win against him…”

Goku realizes this was all just for revenge against him. “That’s right!! Because of you, the Red Ribbon Army’s dreams of taking over the world were ruined, and only Doctor Gero survived.” Piccolo says the way he talks, he sounds like he is Doctor Gero. “Don’t be ridiculous…! I am Doctor Gero’s creation, Artificial Human No. 20. Doctor Gero has died and is no longer in this world.” Goku asks if he also spied on his fight on Planet Namek. “There was no need. By the time of the fight with Vegeta, we had gained complete understanding of your power and techniques. After that, assuming your skills grew any further, we calculated that you wouldn’t have any more drastic power ups like before, because of aging…” Gohan, Yamcha, and Kuririn are looking for the others, but they can’t find them because they’re not fighting yet, and thus haven’t raised their ki.

Goku tells them they forgot to investigate the most vital point, and that will be their downfall. Piccolo says they didn’t know about Super Saiyan, as Goku transforms. Then Yamcha and everyone feel him, and head in that direction. Tenshinhan is surprised at how incredible Goku’s ki is now. Goku tells him and Piccolo not to help, since these guys are aiming for him. “It seems you have achieved a considerable power up. A strange technique… Far greater than our calculations. But, it is nothing for us to worry about. Of course I am, but even No. 19 is at a level that is enough to defeat you.” Goku wants to see that strength right away, and rushes forward at No. 19. 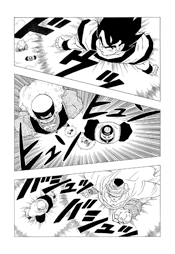 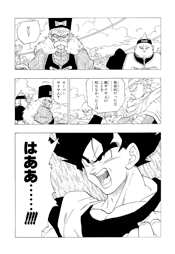 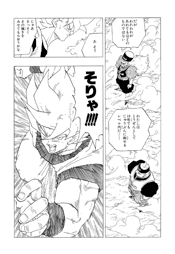