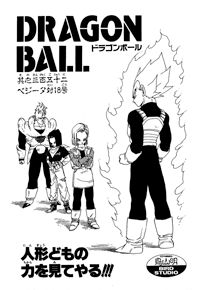 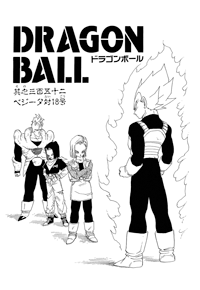 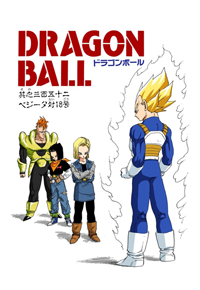 Vegeta and No. 18 stand in the middle of the road staring each other down, and then she charges at him. Vegeta just barely blocks her punches, while she has no trouble blocking his. Vegeta ends up with his back against the mountain, and No. 18 punches at him. He just barely leans away, then grabs her arm and tosses her high up into the upper part of the mountain. He flies up after her, but she gets out of his way. Then she blocks a kick from him, but he gets in a punch. No. 17 is surprised that Doctor Gero’s data on him was way off, and thinks Vegeta is impressive. No. 18 smirks, and Vegeta wonders if a mechanical doll could take damage. He puts out his hand with his palm facing out, and says it doesn’t matter because he’ll blow her to pieces, then she won’t laugh again.

A big 18-wheeler comes up behind No. 18 and the driver yells at them to get out of the middle of the road. Vegeta fires a blast, but No. 18 manages to fly out of the way. The truck explodes, though, and Vegeta is a bit surprised at her speed. No. 18 thinks he wasn’t serious, and Vegeta says of course not. “If I were serious, the Earth would be gone…” No. 18 suggests they get serious, and Vegeta says she’ll regret this. She flies at him and headbutts him hard, and Vegeta starts to bleed from his forehead. He rushes at her and punches her in the stomach, but she just grins and knees him in the stomach. Vegeta doubles over, and she knocks him straight into the mountain. Just then, the others arrive, and Trunks asks Vegeta if he’s okay. Vegeta gets out of the rubble, a bit busted up, and asks them if they really think they’d really be of any help here. 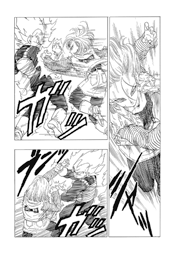 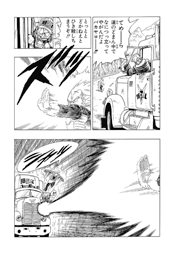 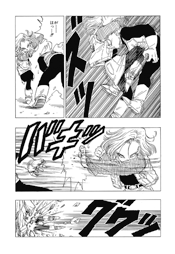