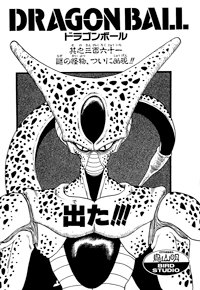 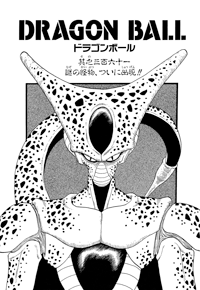 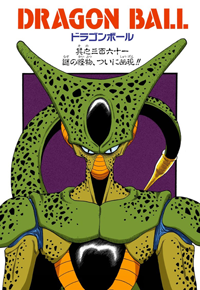 Piccolo confidently says, “So you’ve finally appeared, monster.”, but is shocked when he turns around and sees the monster in full form. The monster is tall, with a humanoid figure mostly, but a very cockroach-ish shaped head, along with wing-type things on his back. He’s spotted, has only three fingers and three toes, and has a long tail with a stinger on the tip. He’s holding another victim by his jacket, and the guy cries for help. Piccolo wonders what this thing is, and the guy says he’ll give him any amount of money to help him, since he’s the richest man in town. Piccolo doesn’t know if the monster can understand him, but he tells him to drop that guy. The monster does so, but then suddenly stabs him in the back with the tip of his tail. Through his tail, he sucks the guy up, leaving nothing but his clothes.

“Next is you, Piccolo Daimaō.” Piccolo freaks out, and wants to know how he knows his name. The monster then starts powering up, causing the ground to cave in a bit, and he says, “I am your brother.” Trunks, Kuririn, Gohan, and Yamcha all suddenly feel the monster’s ki. Gohan says he feels the ki of Freeza, and Freeza’s father. Trunks says also he feels Son Goku, Piccolo, and his dad. Yamcha agrees, but Freeza and his father are supposed to be dead. And Gohan says his father is sleeping. They realize it’s in Ginger Town, too. Trunks says he’s definitely going to make sure now, it must be the identity of the monster that shed its skin. Elsewhere, Vegeta feels it, and so does Tenshinhan.

Back in Ginger Town, Piccolo demands that the monster explain itself. “There is no need, since you’re going to become food for me right away.” Piccolo says he’ll drag it out of him then, and the monster laughs that Piccolo Daimaō thinks he’ll be able to kill him. Piccolo thinks he seems to know about Piccolo for some reason, and then starts powering up. “Sorry, but you’ve mistaken me for someone else.” The monster is shocked at how powerful Piccolo has become. 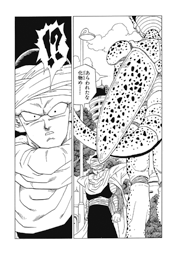 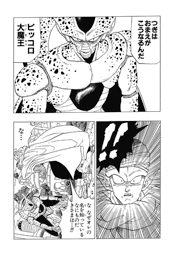 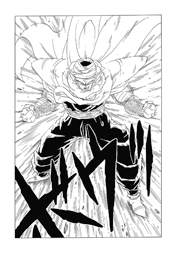