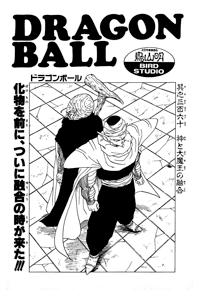 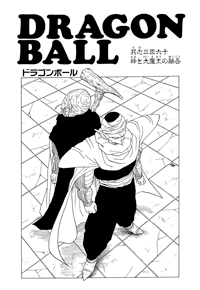 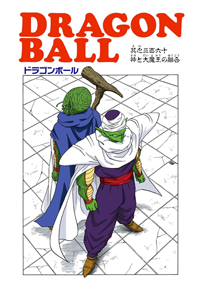 Kami to Daimaō no Yūgō

The Union of God and the Demon King

Bulma calls Kame House, and Kuririn picks up. Kuririn says Gohan and Trunks haven’t arrived yet. She tells him to put the TV on Channel 872, and so Kuririn gets up and does so, and Yamcha and Kame-Sen’nin watch too. A reporter says they have received new information. “After the investigative team’s report, many leftover clothes of what we think are the victims have been found. Now here is our reporter on the scene.” The reporter says, “About fifteen thousand people have vanished. This is all of Ginger Town, but there are new findings. We’ve found many leftover clothes! As though the people had completely melted! Alongside this set of clothes is a rifle, as though this person had tried to fight something.” Kuririn thinks this must be the artificial humans. But Bulma doubts that, and thinks Gohan and Trunks would too.

Kuririn asks if this has something to do with the other time machine, and Bulma says there’s no doubt. They’ll understand when Gohan and Trunks arrive. Chi-Chi then comes down stairs and says Goku’s sleeping peacefully. Gohan and Trunks arrive, and notice that everyone’s staring at the TV. Kuririn tells them to watch the news, and then explain this. “Oh, what was that! Now, I hear a scream!! Gunshot!! I hear gunshots!! For some reason, over in that direction, the investigative team and the police are yelling!! What in the world… Oh, it’s gotten quiet again… If I can, I’m going to get a closer look…” The reporter gets a surprised look on his face, and then the picture cuts out. They quickly change to another channel, only to find a camera on the ground, and someone screaming for help.

God is worried, and Piccolo wants to know what the Hell is going on down there. God says alright, and Piccolo tells him to say what monster he saw in the lower world. God says there’s no need. Once they’re united and become one, he’ll understand. Piccolo is glad he’s finally made up his mind. God says they must hurry, before there are any more victims. Piccolo says he’ll be the base, and God says of course, he’s younger and far more powerful. Piccolo puts his hand on God’s chest, and God smiles and says it’s not a god the Earth needs now, but someone strong. He tells Piccolo his evil heart is nearly gone, and there’ll be no need for them to split again. He thanks Mister Popo, and then… God screams and starts flashing, and then gets absorbed into Piccolo.

Mister Popo tells God goodbye, and says please don’t die. Piccolo says he’s no longer God or Piccolo. He’s a Namekian who’s long forgotten his true name. Then Piccolo tells him goodbye and flies off. Meanwhile, Trunks has apparently explained everything to the others, and says he wants to go make certain it was the thing that shed its skin. Everyone protests, but Trunks says he’ll be okay, he’s a Super Saiyan, and the real threat are the artificial humans. Gohan wants to go to, but Chi-Chi says no. Trunks says he’ll be alright alone, and asks everyone to protect Goku from the artificial humans, then starts to head out the door. Meanwhile, Piccolo lands in the streets of Ginger Town. “So you’ve finally appeared, monster.” 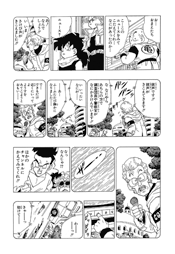 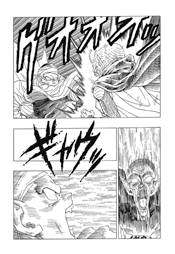 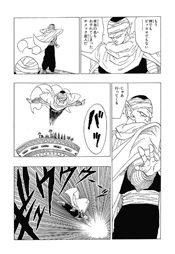