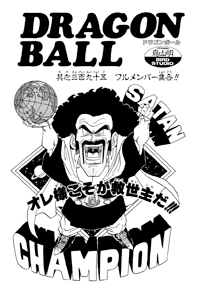 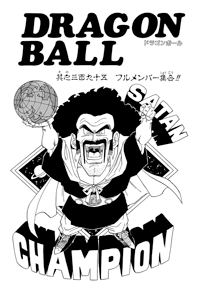 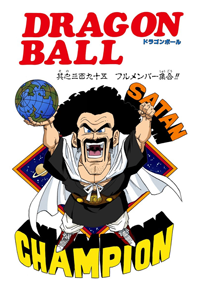 With twelve minutes before the start, Satan is already climbing into the ring. Satan calls the announcer and cameraman over, and so they go, with the announcer calling himself the world’s bravest announcer. They both climb up too, to interview Satan. Satan says he’s going to expose Cell. He knows that it was just a trick involving bombs when Cell destroyed Central City and the army. Cell ignores them, and Satan thinks he’s just scared into shock. The announcer gives Cell the finger, while Satan bends over and spanks himself. Kame-Sen’nin is watching, and thinks it wouldn’t be so bad if this guy was killed. Then the announcer and Satan notice someone flying in. Cell says Vegeta’s arrived, and his skills have gone up. The announcer wonders if he was really flying, but Satan says it was a trick. The announcer goes over to talk to Vegeta, asking who he is, and saying it’s dangerous here. “Get lost. Don’t bother me again.” The announcer goes back to Satan, saying he thinks that dude’s a bit crazy. Even his hair style is weird. Now there are just five minutes until the start of the Cell Games. No. 16 arrives next, with a Capsule Corp patch over his Red Ribbon logo, and Cell is surprised to see him. Vegeta says only Bulma and her father could’ve repaired that robot, but they wasted their time.

Then Cell says Son Goku has finally arrived. Seven of them fly in and land; Gohan, Kuririn, Piccolo, Yamcha, Goku, Tenshinhan, and Trunks. The announcer says they were all flying, but Satan insists it was just a trick. No. 16 walks over to Kuririn, and thanks him for getting him fixed like this. Goku wishes No. 16 good luck, but No. 16 says, “I was created to kill you. Don’t forget that, Son Goku.” Goku cracks his knuckles, and says he wants to go first. Vegeta doesn’t care, because either way, he’ll be the one to finish off Cell. Satan says they don’t get to decide the order, and the announcer asks if they intend on participating. Goku says yeah, all of us. The announcer yells that this isn’t a game, they don’t know anything. Kuririn thinks they’re the ones that don’t know anything, while Satan thinks they’re all hicks who don’t know about the world champion Mister Satan. The announcer goes on about Satan, and Kuririn asks Goku if it’s okay for Satan to be killed. Cell interrupts them, saying it’s time to begin. 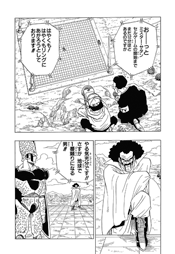 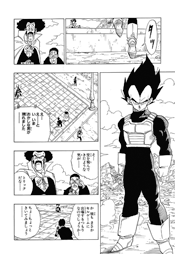 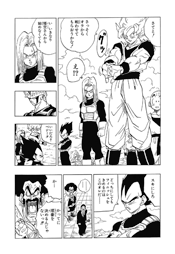