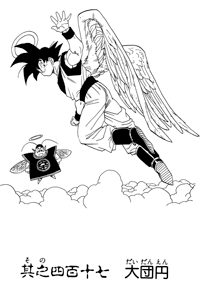 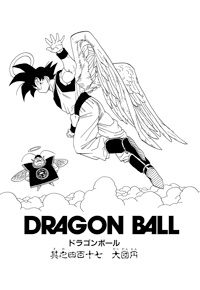 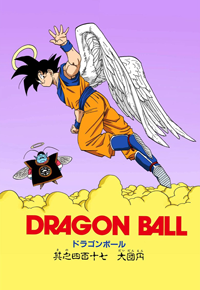 Piccolo can’t believe Gohan actually did it, and Yamcha gets excited. Piccolo, Yamcha, Kuririn holding No 18, and Tenshinhan with Trunks over his shoulder land next to Gohan, and Yamcha excitedly goes on about how well Gohan did. Kuririn says they’ll go to see Dende, since all the senzu are gone. Yamcha picks up the exhausted Gohan, and he, Tenshinhan with Trunks, and Kuririn with No. 18, all fly off. Piccolo turns to Vegeta, and says he lent a hand. Vegeta tells him not to say anything unnecessary, since he didn’t do it to help them. Piccolo smirks, and then flies off with the others. Vegeta says the both of them have done it now, father and son. He gets pissed at Kakarrot, since even after death he was better. Now they can’t fight anymore, and Vegeta flies off somewhere on his own.

Mister Satan gets up, and sees everyone is gone. The announcer gets up shortly afterward, and runs up to Satan asking what happened to Cell. Satan hesitates, and then proudly says that he defeated Cell. They were just doing their tricks with balls of light, so he took care of Cell. The announcer asks about the others, and Satan says they thanked him and went home. The announcer thinks that’s wonderful, and then yells into his microphone about Mister Satan saving the world from Cell. Everyone around the world cheers and chants “SATAN”.

At God’s Palace, No. 18 wakes up, as Dende has healed her. Yamcha yells at Dende to get away or he’ll be killed, but Kuririn says there’s no need. Gohan has already been healed as well. No. 18 jumps back to her feet, but Kuririn says it’s okay. Perfect form Cell was defeated by Gohan. No. 18 is surprised to hear it was Gohan, and Yamcha yells at her how incredibly strong he is, so don’t try anything. Piccolo tells her she should thank Kuririn, as he looked after her after Cell spit her up. Kuririn tries to say it’s no big deal. Then Gohan says, “I get it!! Kuririn likes No. 18!!” Kuririn whacks Gohan on the head, and Yamcha and Tenshinhan are surprised. No. 18 says she wouldn’t just fall for him so easily, calling him a runt as she flies off. Yamcha yells out at her about how he’d kick her ass, and Tenshinhan tells him he’s being unreasonable.

Piccolo says more importantly, they need to return everyone to life, and Mister Popo comes out with a bowl full of the Dragon Balls that Goku had collected. Gohan tells Kuririn it’s okay, he still has his friends, and Kuririn weakly says to shut up. The sky becomes dark and Shenlong appears. No. 18 notices the sudden darkness, and turns around. Yamcha says to please return to life all of the people killed by Cell, and then Trunks sits up. No. 18 is now watching from behind a nearby pillar. Piccolo says he doesn’t feel Goku’s ki, and figures it was no use. Shenlong wants the second wish. Yamcha asks if he could bring back Son Goku, but Shenlong says it’s impossible. So they need to think of another good wish.

“Guys, it’s Goku. I’m talking to you from the other world, please listen for a bit. Bulma kind of said it, but I attract bad guys… If you think about it, it really is true I guess. I think that without me, there’d be peace on Earth. Kaiō also noticed this. I didn’t really think I’d become a sacrifice. Since I’ve saved the Earth and stuff, I’ll get special treatment. Ordinary people and bad guys like Cell become just souls. I get to keep my body! And since I’m dead, I won’t age! Here in the other world, there are experts from the past, it should be very fun. Though Kaiō would’ve been returned to life by Shenlong just now, he stopped so he’ll keep me company. And so. I thought of how it would be bad for Chi-Chi and Gohan, but I figured it’d be okay. Gohan is already more together of a person than me.” Gohan disagrees with that. “With that, see ya! Some day when you guys are dead, let’s meet again! Bye-bye!” An image of a happy Goku appears in the sky, and Kuririn thinks he looks so cheery even while dead. Nonetheless, Shenlong wants the second wish. 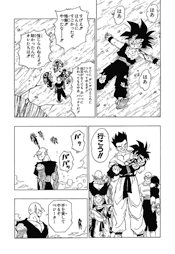 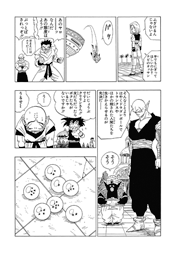 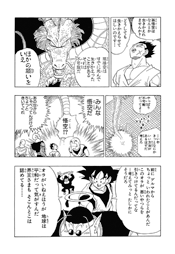