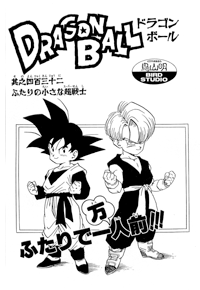 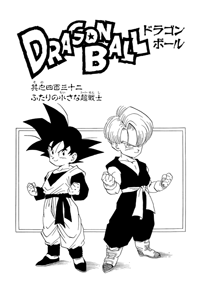 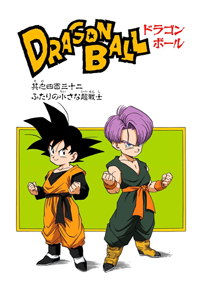 Gohan asks Videl how her flying is going, and she asks him why he isn’t shocked that person destroyed the punch machine. Everyone in that group got over 200, and her papa’s record was only 139. In the meantime the rest of the contestants will have to wait for another punch machine, so Goku suggests to Vegeta they go watch the Youth Division. “Whatever. Anything’s better than here.” Videl continues wondering about that group, as they come over toward Gohan, with Goku noting that his friend was a girl. Kuririn says she’s a very cute girl, at that. Goku says they’re all going to watch Trunks and Goten, and then head off. Videl can’t believe Gohan knows them, and he explains that the one in the ‘mountain smoke-colored’ dōgi was his father. Videl had thought his father was dead, and Gohan says that’s why he has the halo above his head.

The announcer says the winner of the Youth Division gets 10,000,000 zenny, and the runner up will receive 5,000,000. The winner will also get to participate in a special attraction fight against Mister Satan. Satan then runs out to the ring, but slips and falls. Everyone watches on as Satan writhes in pain, but he quickly jumps up and says that it was just a joke. Inside, Goten says he’ll buy toys and candy with his prize money. Trunks wants to buy more mature things, and Goten comments that Trunks is from the richest family in the world. Two other kids are talking, and one kid with a mullet says he’s lucky to have gotten that kid over there (Trunks) for an opponent. The mullet kid goes over to Trunks and asks if he’s got his diaper on for when he pisses himself, but Trunks just insults his hair. The mullet kid gets pissed, but Trunks remains calm. Back outside the announcer asks how Mister Satan is feeling. Unfortunately for his opponents, he’s feeling very healthy!

But now it’s time for the Youth Division of the Tenka’ichi Budōkai to begin. Kuririn thinks everything’s gotten so much flashier, and Goku says the ring’s much bigger. Of course, Piccolo doesn’t like any of it. The rules are the same as for adults: Giving up, ring out, being down for a ten count, or being knocked out all result in a loss. However, there won’t be any preliminaries for the Youth Division, and all thirty-five kids will fight in the main ring. Outside, Gohan and Videl are still lined up at the punch machine, unable to watch.

Some time passes, and the ninth match is Trunks, age 8, versus Idasa, age 15 (the mullet kid). They head to the ring and Idasa’s mom cheers him on, insulting Trunks in the process. But, she happens to be sitting next to Bulma, who then cheers Trunks on. The announcer calls for the match begin and Trunks quickly sweeps Idasa off his feet, kicks him up into the air, and he’s knocked out as he crashes face first into the ring. Idasa’s mom is devastated, Bulma laughs, and Kuririn thinks it’ll be really boring until Goten and Trunks fight. Trunks tells Goten this was why he wanted to fight adults. 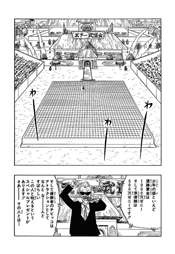 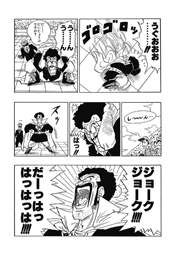 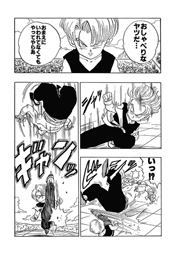