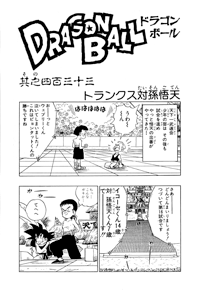 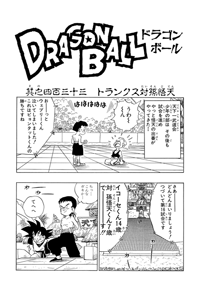 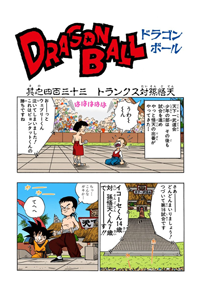 More matches have passed and now it’s time for match sixteen, Ikose, age 14, versus Son Goten, age 7. Ikose’s mother, who is the same lady from Trunks’ match (i.e. Idasa’s mother), yells at him to not be careless like his brother. Chi-Chi yells at Goten to go easy on him. The lady gets pissed that there’s another vulgar woman with a “shit brat” for a kid, and Bulma makes fun of her sons. Goten bows before his opponent, and Ikose thinks he’s such a hick. At the same time the announcer thinks this Son Goten must certainly be Son Goku’s son, since they look so much alike. The match begins and Goten effortlessly blocks all of Ikose’s moves, and tells him to get serious. So, Ikose tries a bit harder, but Goten still blocks it all effortlessly, then gets bored and knocks him out with a single punch. His mother gets pissed and tries to attack Bulma, but Chi-Chi knocks her out.

Videl says it sounds like Goten won his match, but Gohan isn’t too enthused, so she thinks he doesn’t care. Meanwhile, Goten and Trunks each blaze through the competition, until it comes down to the two of them in the finals. The announcer says not only are they both very strong, but they’re friends. An attendant tells Mister Satan there are two very strong kids in the finals, and so Satan decides to go watch after all. Kuririn and Goku are glad they’ll finally see a good match, as Videl and Gohan join them in the stands. The match begins, and Trunks and Goten promise to not go easy on each other. As he watches on, Satan thinks Goten looks very familiar.

The two young Saiyan warriors rush at each other, blocking each others’ strikes, and then break. But they fly right back at each other, into the air, and exchange punches, eventually punching each other in the face. Goten hits at a few of Trunks’ afterimages, then Trunks hits at Goten’s afterimage, and they exchange more mid-air blows, until they finally break away and land back in the ring. The audience is stunned, especially Mister Satan. But Goku and Kuririn think they’re doing great, and some of the audience starts to get quite excited as well. 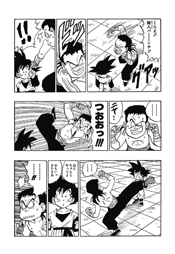 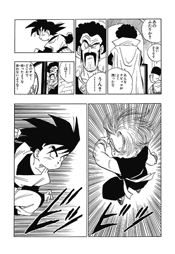 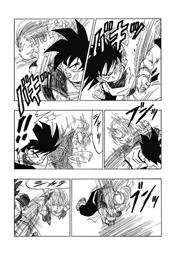