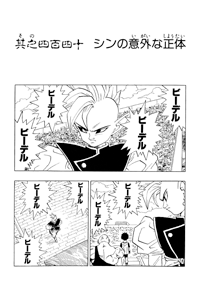 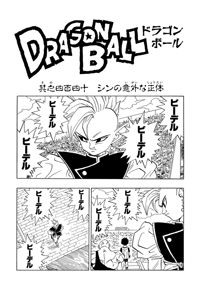 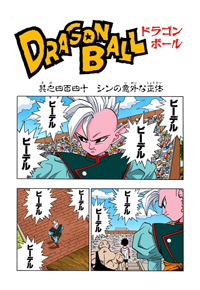 Shin is still glaring at Spopovitch as he continues backstage. Videl has a bad feeling about this guy, as Erasa cheers her on from the crowd, and Shapner has no doubt she’ll beat this guy easily. As they watch on from the sidelines, Killa and Jewel note how much Spopovitch has changed since the last time (he used to have hair, etc). The match is called to begin, and the crowd continues chanting “VIDEL”. Backstage, Piccolo asks Shin if he might be the Dai-Kaiō, but Shin insists he is not. Kibito steps in and corrects Piccolo, saying that Shin is “Kaiōshin-sama“. Kaiōshin asks Piccolo to please keep this quiet, for now. Piccolo is shocked to hear all this and recalls that above the four Kaiō is Dai-Kaiō, but he’s heard that even further above that is the god of the Kaiō, Kaiōshin. Goku asks Piccolo if that guy said something stuck up, if so he’ll go say something to him, but Piccolo freaks out and tells him not to say anything. Meanwhile, Kaiō wonders why Kaiōshin, whom even he has never met, would be on Earth.

Back in the ring, Videl kicks Spopovitch and knocks him down, but he gets back up and comes at her. She blocks his strikes, and Goku and Kuririn thinks she’s doing really well. Videl hits him in the face, and then knocks him across the ring. But he still gets up again, and Goku notices something. Spopovitch runs back toward her, but Videl kicks him in the face, elbows him down, pummels him in the gut, and finally knees him in the face. He goes down, and Videl tries to catch her breath. But Spopovitch gets right back up, bleeding and grinning. Goku says that she should give up, as something is weird about him. Spopovitch then rushes at Videl and smacks her across the ring. 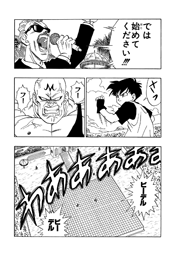 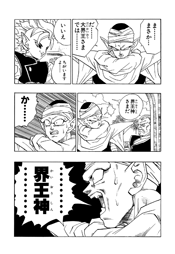 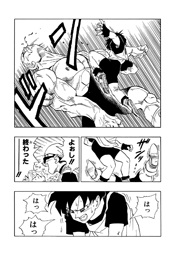