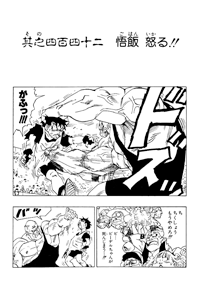 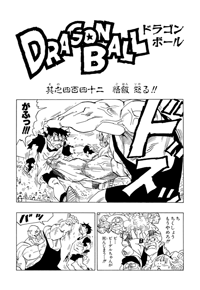 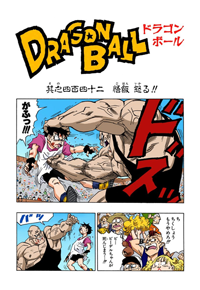 Spopovitch holds Videl up by the head, and then punches her viciously in the stomach. Then he knocks her across the ring, and she hangs just over the edge. Gohan yells at her to give up, and even the announcer insists she should, but Videl refuses. Gohan keeps protesting, saying he doesn’t care that she’s just a girl. Videl gets back to her feet, and then kicks Spopovitch in the face, although with little effect. Spopovitch smirks, grabs Videl by the hair, and then knees her hard in the face. Videl is in complete agony as the blood drips from her mouth and nose. Spopovitch tosses her to the ground, as Shapner and Erasa are getting quite upset, while Gohan is starting to get enraged backstage.

Spopovitch starts stepping on Videl’s head, and that’s when Gohan completely loses it. He suddenly turns Super Saiyan, causing his bandanna to fly off and his cape to rip away as well. But just before he runs out to put an end to it, Yamu yells at Spopovitch to stop fooling around. Yamu jumps over to the ring and says this was not what they were supposed to do, so hurry up and win. Spopovitch then drags Videl to the edge of the ring and tosses her to the ground for a ring-out. Gohan turns back to normal and rushes out to help. He picks up Videl in his arms, telling the announcer he’ll take her to get help, and then angrily tells Spopovitch he won’t get away with this. Goku asks Kuririn if anyone has senzu, but Kuririn says no, since this was just supposed to be for fun. Goku decides he will go see Karin about getting some, and teleports away. As Gohan rushes backstage with Videl he’s relieved to hear that Goku went to get some senzu for her.

Satan soon learns of Videl’s great injury and loss, and freaks out. He runs out of his lavish waiting him over to medical area where she’s healing up. Gohan assures him that her life isn’t in danger, and Satan gets pissed and thinks he did this. The doctor says he was the one who brought her in, and so Satan offers to give Gohan his autograph later. Gohan tells Videl he’ll get that guy in the next round, and then leaves. Satan says that weakling can’t do anything, he will get revenge for her. Videl smiles softly, and Satan realizes what this means. He won’t let her get involved with such a weakling, thinking she can only have a boyfriend who is stronger than himself. Meanwhile, Goku thanks Karin for the senzu. Before he leaves, Karin says he’s getting bad premonitions about all that’s going on, and Goku says he is as well. 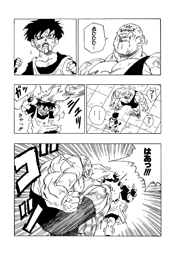 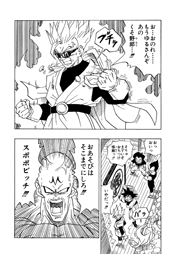 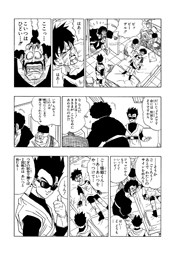