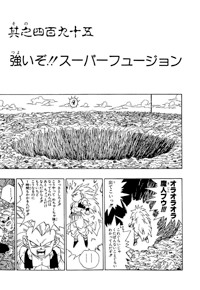 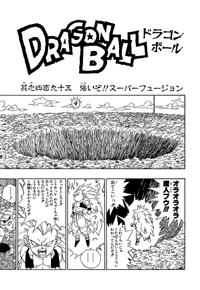 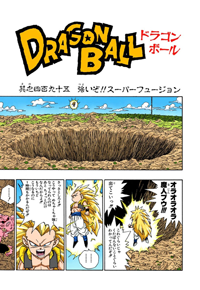 He’s So Strong!! The Super Fusion

Gotenks calls Boo out of the crater, knowing that his attack wouldn’t be enough to kill him. He tells Boo to hurry up, since he won’t be able to stay this strong for long, and it’ll be an hour before he can do it again. Piccolo arrives, and Gotenks says maybe he was too strong after all and Boo really is dead. But suddenly a huge blast shoots up from the crater, barely missing Gotenks and Piccolo. Piccolo nervously notes that the blast had enough energy to obliterate the Earth in an instant. Gotenks is mad, and decides to fire some Rapid-Fire Die-Die Missiles down into the crater. Piccolo warns him that he’ll blow up the Earth, but Gotenks isn’t too concerned, since everyone’s dead anyway. Piccolo yells at Gotenks that he could end up destroying a Dragon Ball, and if even just one ball is destroyed, then nothing can be restored.

Gotenks stops, thinking Boo’s probably been weakened anyway. Boo comes flying up out of the rubble, but not really weakened. Piccolo says he really is weakened; although not physically, but certainly in spirit. Boo’s never fought anyone this strong before. Gotenks gloats and thinks Boo’s scared, but Piccolo scolds him about being careless. Boo flies over and headbutts Gotenks off into the distance, and then chases after him. Gotenks dodges a punch, and then hammers Boo into the remains of a city. Gotenks flies at Boo, but Boo shoots a huge mouth blast at Gotenks. As the smoke clears, an angry Gotenks appears, burnt to a crisp. He decides to counter with his own mouth blast, which fries Boo in return. The two take to the ground, and Gotenks gets in a kick, blocks a punch, and gets in another kick, before taking the upper hand and absolutely pounding on Boo. Goku thinks Gohan won’t even get a turn at this rate. Gotenks announces he’s going to finish this and bust Boo up into tiny little pieces, and he won’t be able to recover anymore, because he’ll wipe Boo out with his ki this time. But then suddenly, Super Saiyan 3 runs out and Gotenks return to normal… 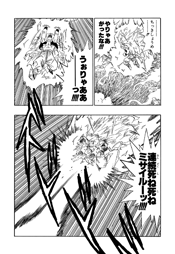 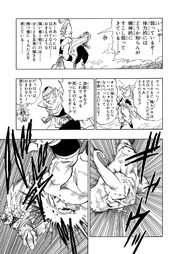 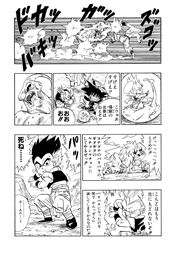