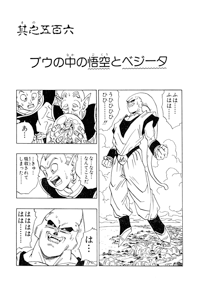 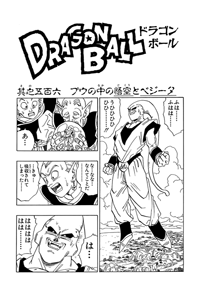 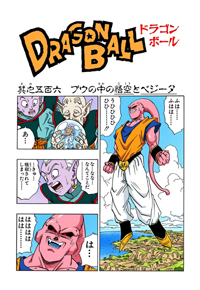 Goku and Vegeta Inside of Boo

The Kaiōshin can’t believe he was absorbed, as Boo begins to laugh and curse at Vegetto, flipping him the finger. Kaiōshin thinks it’s all over, while Old Kaiōshin notes that it’s odd that Majin Boo hasn’t powered up at all, and his form hasn’t changed like before. He thinks Vegetto may have been planning something great. Boo stops his laughing, wondering why he hasn’t changed. But in any case, he’s now the strongest majin, and there is no one left get in his way. Boo rips off his shirt, as he laughs maniacally in shear pleasure. Meanwhile, Vegetto is somewhere inside of Boo, very annoyed at Boo’s obnoxious laughter. But he’s glad the barrier worked, and he wasn’t absorbed. He decides he’ll go ahead and down the barrier so he can start looking for Gohan and the others.

The Kaiōshin notice what Vegetto has done, and think it’s a great idea. Vegetto drops his barrier, and he suddenly splits back into Goku and Vegeta. Goku wonders how this is possible, since it was supposed to be a permanent fusion, but Vegeta is just glad to be separate again. He won’t fuse with Kakarrot a second time, and takes off his Potara. Goku scolds him, since they can probably fuse again once they exit Boo. Goku thinks it must be the bad atmosphere within Boo that’s doing this. Vegeta smirks and crushes his Potara. Goku says that not only can they not fuse again, but since Vegeta is dead, he’ll have to return to the afterlife now. Vegeta would prefer that to fusing with him again.

Vegeta doubts they need to fuse again anyway, but Goku says they don’t know that. Vegeta says in that case, they’d better hope they find Gohan and the others. Vegeta walks off, saying they should hurry before Boo blows up the Earth. Goku crushes his own Potara and follows. Seeing them destroy the Potara, the Kaiōshin begin freaking out. Vegeta then calls Goku over, as he’s found Piccolo. He’s trapped inside this little pod connected to the lining of Boo’s innards. Goku then notices Gohan, Trunks, and Goten. Back outside, Boo thinks he’ll celebrate by destroying the Earth. Vegeta notes that the youngsters have lost their fusion, too, but Goku says it was just the thirty minute time limit of Fusion. Besides, Boo obviously had the characteristics of Gotenks before. Goku then realizes it means they could do Fusion in here, too. Vegeta thinks instead they should just hurry and get out of here.

Goku and Vegeta start cutting everyone’s pods free, and Boo suddenly reverts to looking like Piccolo. He suddenly realizes what’s happening, but it’s too late and he has regressed all the way back to his pre-absorption form. Goku notes that Boo’s power has dropped, and the size of his ki is much different. Vegeta thinks they should bust their way out now, but Goku insists they still can’t contest Boo’s strength. They’ll be killed for sure if they go outside. Vegeta asks what they should do then. Goku wishes he hadn’t destroyed the Potara, but there’s still one more method. Vegeta had seen Fusion from the afterlife, and refuses to do those ridiculous poses. Plus, he said he would never fuse with Kakarrot again. Suddenly though, they notice another pod. Inside of it is the good Boo that had befriended Mister Satan, and Goku thinks they should cut him free. However, they don’t notice the Boo that has appeared behind them… 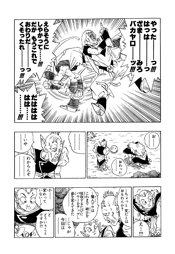 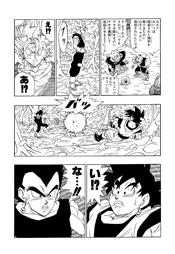 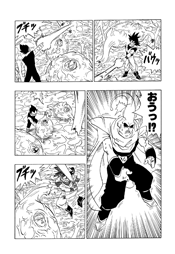