During serialization of the Dr. Slump comic series, Akira Toriyama dabbled his way through a couple kung-fu stories, with two works in particular serving as the direct basis for what would ultimately become the Dragon Ball series: Dragon Boy (a two-chapter comic in 1983) and The Adventure of Tongpoo (a single-chapter comic later that same year). Young boys with strange physical attributes, a female companion, a long quest, transformations, and even a dragon ball…?! It was all here before Dragon Ball-proper even began!

Softcover | JIS B5 (18.2 × 25.7 cm) | 15 pages
Tangtong, a naive boy living in the mountains, is tasked by his master to return a princess to her homeland. With a dragon jewel in hand for emergency situations, Tangtong’s true nature is revealed when they are attacked by a demon!

Softcover | JIS B5 (18.2 × 25.7 cm) | 21 pages
As Tangtong and the princess arrive in the water country of Heyun, they are both deceived by a shape-shifting monster and attacked by a mechanized guard! Will they ever make it to the flower country?!

Softcover | JIS B5 (18.2 × 25.7 cm) | 45 pages
Due to engine failure, space explorer Tongpoo accidentally lands on what appears to be an uninhabited planet. When he meets a young lady hiding from a dangerous alien, the two make plans for their escape! Something seems different about Tongpoo, though…

Following his work on Dragon Boy and The Adventure of Tongpoo, Toriyama moved on to drafting what would ultimately become Dragon Ball itself, though it would take several revisions before it truly took shape. 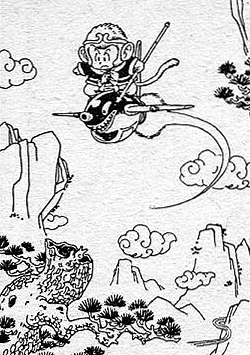 In the early stages, Toriyama decided on a somewhat-faithful adaptation of Journey to the West. Having decided on a young female companion (no doubt shaped by both Dragon Boy and specifically The Adventure of Tongpoo), a western-style girl took the role of Sanzo. Toriyama’s design of Son Goku was literally that of the Monkey King himself, complete with the head decoration and staff. “Pigsy” came over mostly intact as well, complete with his trademark rake. By way of Dr. Mashirito commenting in 1987’s Dragon Ball: Adventure Special, we learn that this draft was rejected for simply being Journey to the West as-is.

Toriyama’s original editor Kazuhiko Torishima also comments (as himself this time!) on this change in his 2016 interview with Forbes:

The really important thing for boys manga is that you need to make the readers feel like they are connected to the protagonist. There needs to be a very strong emotional connection from the reader to the protagonist. That they see themselves as that character. So if the protagonist in Dragon Ball was a monkey, which was the original plan, then no-one could relate to that.
— Kazuhiko Torishima, “…On Shaping The Success Of ‘Dragon Ball’…” (Forbes — read full interview)

By the second pass, the main character had already become a “regular” human (as opposed to an actual monkey), the girl character traveling with him was much closer to the final form of Bulma, and it was here that Toriyama already began to incorporate some science-fiction elements into the otherwise-Chinese-style setting. By way of Dr. Mashirito commenting in 1987’s Dragon Ball: Adventure Special, we learn that this draft was rejected at least partially on the basis that there was “no energy” to the main character “dressed as a good little boy!” 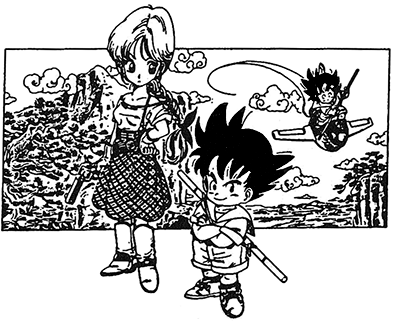 With that in mind, this is the result of my drawing the characters anew. Having come this far, it was almost Dragon Ball! Although, even at this point in time, I still hadn’t come up with a title. Well, I was busy just coming up with the story, so I didn’t have the time to go so far as think of one… [sheepish laughter] However, I had at least come up with names for the characters. The boy is “Son Goku”, absolutely! The girl is “Pinchi”. When her name was set as “Pinchi” was also around the time I started thinking of making the work an original story.
— Akira Toriyama, “The Making of Dragon Ball” (Bird Land Press 15 — read full translation)

In the third pass — which moved through both pilot and final manuscripts — story details began to take form, as well as the names for Yamcha, Pu’er, and Oolong. At this point Goku is still a “human” boy, albeit one with a tail — an element added due to prior rejections over no distinguishing trait for the character. Some of the only differences are that the female companion’s name and appearance are not quite there yet: even at this late point, she is still named ピンチ (Pinchi), though Toriyama is well on his way to making even more changes before the final draft truly becomes Dragon Ball. The 1987 Dragon Ball: Adventure Special notes that “Pinchi” originally had a serious personality, but along with her personality getting rougher, her name was changed to the “slightly vulgar” name “Buruma”, who would be around 14-15 years old, and was made “much sexier” at the insistence of his editor. The book notes that the only element of Son Goku’s design that has not changed since the original draft is the Nyoibō in his hand, and that the character is “around 11 years old”. The book also notes how it is around here that Toriyama decides on the idea of having eight shining orbs that, when brought together, release a legendary dragon who grants one wish before departing and scattering the orbs once again, meaning the characters would have to gather them again before making another wish — a great device to create a story around! In his Q&A elsewhere in the Adventure Special, Toriyama specifically notes that he changed the number to seven because, “…there’s those eight balls in Hakken-Den, and I’d hate for it to be exactly the same, so I had there be seven.” 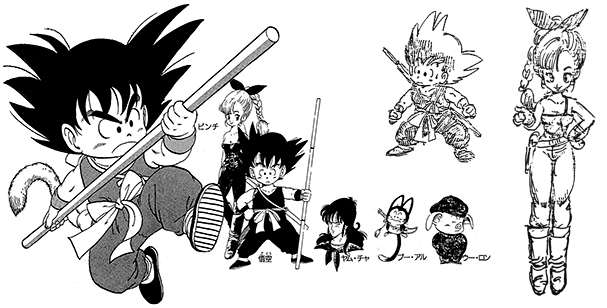 The setting looks Chinese at first glance, but it’s actually an entirely fictional locale. The era is all over the place! And I think that’s fine. That’s because I can draw what I like, and whatever it turns into is fine! In other words, it’s “anything goes”, my specialty. The story is a “science-fiction adventure-comedy + love-comedy + sexy”. As far as I’m concerned, love-comedies… are something that gives me headaches, even now. With this, I’ve lost at least 10 of my precious hairs. P.S.: “Pinchi” is now called “Buruma”. I’ll add in something here to show how her hair and clothes have changed a bit.
— Akira Toriyama, “The Making of Dragon Ball” (Bird Land Press 15 — read full translation)

For even more comparisons between Dragon Ball and Toriyama’s other one-shots — including Pola & Roid and Pink: The Rainjack Story — check out the “Tale of the One-Shots” feature article in our 30th anniversary magazine, DB30YEARS.