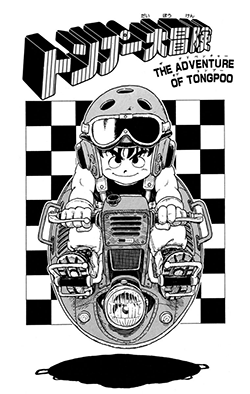 “Planet 12”, the twelfth ship sent out to investigate alien planets, drifts through space with its sole crew member, Tongpoo.

Tongpoo is awoken from his sleep chamber, and after some incidents washing up and using a butt-cleaning device that takes up a significant portion of the entire space ship, he gets on with his mission of checking out this new alien planet. The only trouble is, however, that no planet is to be seen and the ship’s emergency warning is going off. Tongpoo uses the computer system to find out that engine number two is damaged, and the ship is set to explode in under a minute.

Scrambling to his scout ship and escaping just in time, Tongpoo figures he will have to just keep flying until he runs out of fuel and then swim the rest of the way… if he can even swim in space. Spotting a planet close by, Tongpoo lands to find it mostly covered by water, but with a few islands and decent air quality. Tongpoo boils up some water and drops in his number 12 capsule to produce a hoverbike. He comes across a wrecked spaceship and swims inside to check it out, only to discover it is actually Planet 8, a ship that left two years before him! Tongpoo figures the three crew members must have landed here and had trouble. He stumbles across one dead pilot, who had clearly been shot through the chest, so Tongpoo readies his own pistol. Peeking over a rock, Tongpoo spots a girl taking a bath.

After briefly breaking each other out, the girl asks Tongpoo if he knows how to use a machine gun she has nearby. Tongpoo politely explains how to use it, only to have her turn around and fire on him with it! Tongpoo tries to reason with her, explaining that he is also a human; he proves it by answering that the tallest mountain on Earth is Mt. Everest. Settling down, the two chat out how the three crew members arrived, but two days later an alien spaceship also arrived, and the alien who emerged killed the other two. The girl says that she hid the whole time, which is the only reason she is still alive, but has been struggling ever since. Tongpoo decides to bring the girl — named “Plamo” — back to his “house”. Plamo does not see a house, though. Tongpoo says she must not know about the capsules, and uses #4 to produce a full house! Plamo digs in to a boxed lunch while Tongpoo is satisfied with his (rather gross) drink. Plamo has no idea where this planet is, so Tongpoo wonders why she was selected for this research. Plamo takes out a spoon to show her supernatural powers… and an hour later, the spoon has indeed bent a tiny bit. Plamo wonders why Tongpoo was chosen, to which he answers that she will see.

After a failed attempt at washing up together, Plamo busts out a sexy dress that she says is part of her plan to distract the alien and steal their spaceship. Tongpoo wonders if aliens would even care about her looks.

As the planet’s sun rises and wakes up its inhabitants, Tongpoo and Plamo take off on the hoverbike in search of the alien and its spaceship. They spot the ship in the distance, and when it seems like the alien is nowhere to be seen, Tongpoo rushes in. Tongpoo peeks around trying to figure out the layout of the ship while Plamo makes her way inside, as well. Tongpoo finds the control room and decides he will bomb the spaceship from the fuel room. While he doesn’t have a bomb, he does have a grenade; Tongpoo runs back to the ship’s kitcken, grabs some ice, and creates a makeshift time bomb: when the ice melts, the grenade latch between the two cubes will open and detonate.

Tongpoo rushes out only to find Plamo captured by the alien… who thinks the alien must be gay since the sexy outfit did not sway him. Tongpoo goes to fire his pistol, but the alien shoots a much larger gun right through Tongpoo. The alien attempts to eat Plamo, but she somehow manages to get free. Tongpoo is suddenly back on his feet, even with a hole through him! The alien keeps firing at Tongpoo, but he is a cyborg! Completely angry now, Tongpoo unleashes on the alien, knocking him out with a couple swift punches. It is just then that Tongpoo remembers the grenade which is about to explode, so he grabs Plamo (who is distracted and smacking the unconscious alien with a stick) and runs away just in time.

Back at the capsule house, Tongpoo and Plamo try to figure out what to do next. With only the tiny little scout ship, they will never make it back to Earth, so they will have to look for another nearby planet. Tongpoo says the ship is only made for one person, but Plamo knows exactly how to handle that.

With Tongpoo hanging on for dear life atop the ship, Plamo flies off in search of another planet. Their adventures are only just beginning!

Alongside The Adventure of Tongpoo in this 1983 #52 issue of Weekly Shōnen Jump (released 29 November 1983), Akira Toriyama is at chapter 199 in Dr. Slump, a series he will be wrapping up the following August with chapter 236. Previous professional one-shots up to this point have included:

The Adventure of Tongpoo has only ever been printed and re-released in its original black and white palette. 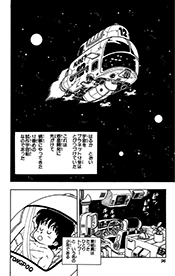 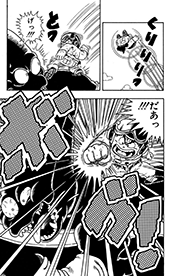 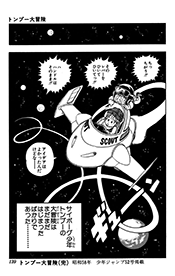 Previous »
Manga Guide / Dragon Ball Prototypes
Next »
Connect With Us
Support Us
Your support for Kanzenshuu is what keeps us going. You can help by donating to us directly, or by shopping online at certain retailers through our affiliate links below. Every bit counts and helps contribute to our server fees and bringing you new site content, reviews, and contest items.