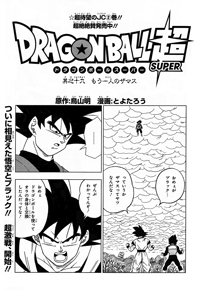 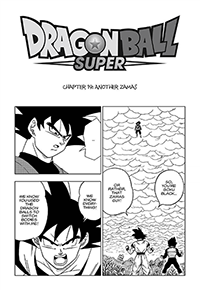 Goku and Vegeta finally meet Black and announce that they know his true identity. Black explains that he killed the Goku-in-Zamasu’s body, but is curious how Goku and Vegeta are here now in this timeline. Vegeta wastes no time and rushes in to attack. Black takes all of the attacks, though he appears to successfully block each one. Black then turns Super Saiyan and goes after Vegeta, who is able to dodge around a blast and deliver a double-fisted sucker punk to Black’s gut. The two continue their fight as Goku, Trunks, and Mai look on from a distance. Trunks remarks that it has been a long time since he has seen Black transform, and that Black seems even stronger now. Vegeta lands a few more good hits, forcing Black to eventually put up a barrier. Black continues to wonder aloud which timeline these two came from. Vegeta responds by acknowledging that Black took Goku’s body from the future, so he should be able to go Blue on top of this. Vegeta smirks and transforms up to Blue, continue to goad Black on. Black responds that he is unable to transform into that state, and so Vegeta resumes his assault, all the while giving back-handed compliments to the real Goku’s fighting ability.

Back in the past timeline, Zamasu finally arrives, only to find Universe 7’s Beerus and Whis have come to visit Gowasu. Beerus gets right down to business, interrogating Zamasu about his visit to Zuno’s and his inquiry over switching bodies with a human. The Kaiōshin of Universe 7 suddenly arrives, having just returned from a visit to Zamasu’s future to see all of his upcoming treachery. Gowasu demands that Zamasu explain himself, but the self-righteous Zamasu replies with a smile.

In the future, Black continues to struggle against Vegeta, rambling on and on about humans polluting the world. Vegeta is fed up with this nonsense talk of justice and continues to easily handle Black in the fight, which only serves to anger the god more.

Back again in in the past, Zamasu forms an energy blade, but is immediately stopped by Beerus, who then places a single hand to Zamasu’s face and promptly destroys him. Even Whis joins in on scolding Gowasu for his choice, though Universe 7’s Kaiōshin asks that they depart in order to share news with Goku and Vegeta.

Goku, Trunks, and Mai continue to watch the battle with Black, rather confident that Vegeta will win. They have an uneasy feeling, however, so Goku yells for Vegeta to forget about him having a turn and to just finish the fight. Just as a Final Flash is about to take out Black, someone suddenly rushes in and saves the failing god, setting him down atop a distant building.

Kaiōshin explains to Beerus and Whis that in the future Black is not acting alone; he in fact has a partner.

This partner has rescued Black, and appears to heal him back to full health. Together — both Goku Black and Zamasu — they are one step closer to the ultimate body and enacting their Zero Mortals Plan. 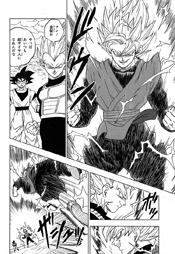 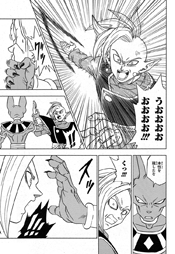 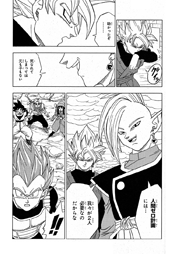