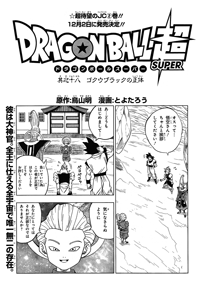 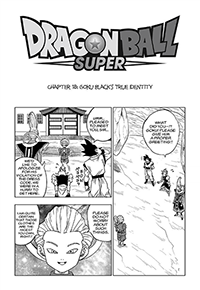 Goku arrives with Whis and the Eastern Kaiōshin and is greeted by the Great Priest. Whis apologizes for Goku’s garb, the but Great Priest acknowledges it probably does not get much more formal than this with Goku. As they head in to meet the Omni-King, Goku mentions to Whis that the Great Priest seems pretty strong; Whis confirms this, telling Goku not to ask for anything like a fight, though. Goku wonders if they should pipe up about Goku Black since he would not be a match, but Whis explains that they as angels are to remain neutral and never fight. Besides, were the Omni-King to get word of this, the entire universe might get wiped out…

The Omni-King greets them all and says he wants a friend! Goku will do just fine! They can be friends and play. Goku wonders if this is all the Omni-King called him out here for; Kaiōshin tries to chime in saying this is fine, but the Omni-King tells him to hush. The Omni-King wants to know what to call Goku (just “Goku” is fine), and wants a pet-name of his own; Goku decides on “Omni-chan” (which causes Kaiōshin to pass out) and asks if he wanted to discuss the multi-universal tournament the Omni-King mentioned at the end of their match with Champa’s team. They will talk about that later, but for now, they should play. Goku explains that he is busy and has other things to deal with right now. Though his attendants berate Goku, the Omni-King hushes them as well. Goku promises to return when his business has been taken care of, and he will bring someone who will be an even better friend for the Omni-King! Goku is presented with a button that he can press to summon the Omni-King at any time. As Goku scoops up Kaiōshin and departs with Whis, the Great Priest ponders what an interesting friend he shall be for the Omni-King.

Gowasu takes a break to call for Zamasu to make some tea, but Zamasu is nowhere to be found. Gowasu wonders where he has gone off to…

On Zuno’s planet, Zamasu receives instructions on how to use the Dragon Balls. Zuno is hesitant to answer any more questions, but Zamasu pulls rank as a Kaio to learn more specific details, going so far as to ask the specific location of each Dragon Ball.

An irritated Beerus awaits the group’s return. Whis thanks Beerus for meeting them, while Goku exclaims how nice “Omni-chan” is. Beerus cannot believe this nickname, but Whis is more concerned with who this “friend” might be that Goku has in mind. It turns out that Goku does not have anyone in particular in mind, and felt it was the only way that the Omni-King was going to let them leave. Goku wonders if Beerus should go since he has so much free time! The group turn their attention to the more pressing matters at hand; Kaiōshin pipes in wondering who this “Goku Black” character is that everyone keeps mentioning. As Bulma arrives, Goku explains the entire situation. Beerus is looking for the culprit; Kibito was suggested earlier for having such a stern face. The frightened attendant goes on to explain that a sage named “Zuno” has contacted the Kaiōshin Realm and that Zamasu from Universe 10 had visited to ask about the Super Dragon Balls! Beerus wonders who this is; Kaiōshin notes that he is actually a Kaiō from Universe 10 in training to become a Kaiōshin there. Zamasu must have seen the Universe 6 vs. 7 fight on GodTube. Kibito explains further, noting that Zamasu even asked if it would be possible to use the Super Dragon Balls to switch the bodies of a god and human!

It is clear now that Zamasu has somehow switched bodies with Goku, and this is the “Goku Black” that is terrorizing the future. This is confusing though: Trunks notes that the Goku in his timeline died a long time ago. How could this possibly be? Beerus explains that the Kaiōshin can use “Time Rings” to travel to parallel worlds. If Zamasu is still only a Kaiō, though, how is this possible? Upon further questioning, Trunks reveals that “Goku Black” does indeed wear one Potara earring, but is unsure of its specific color. Through a brief vision of Black taunting him, Trunks is able to confirm the color. Whis figures that the Kaiōshin in Universe 10 must now be in grave danger; Bulma pieces it all together, assuming that Zamasu must kill that Kaioshin, take his earring and rank, and then used a Time Ring to travel to Trunks’ world. Goku wonders why he would bother going to that future, but Whis assumes it must be because all the strong warriors like Goku are alive here, so that world would be easier to take over. Beerus blames Goku for dying in that timeline, but Whis is concerned that Zamasu may hide out here and attempt to kill them all, as well.

Beerus demands that they depart for Universe 10 and destroy Zamasu, but Kaiōshin wonders if this will just create yet another timeline and further complicate things. Goku wants to tag along, but this is a job for the gods. Beerus has another take in mind for him, anyway. Beerus and Whis depart, leaving the group behind. Vegeta is upset that someone would go after Kakarrot instead of himself; anyway, Monaka was the one who truly won in the end, regardless. Pilaf informs everyone that they have collected enough energy for the time machine. Goku and Vegeta are ready to take off to defeat this guy! There is no sense in waiting around for Beerus and Whis; they will have to defeat this guy on their own sooner or later.

Beerus and Whis arrive to greet Gowasu in the Kaiōshin Realm of Universe 10. After exchanging pleasantries, Beerus and Whis explain their intention to meet with Gowasu’s disciple. Zamasu appears to have stepped out, however; this is the first time he has ever left without Gowasu’s permission. Beerus intends to wait until Zamasu returns.

Vegeta and Goku confirm they have Senzu with them and depart for the future with Trunks. Upon arriving, Goku and Vegeta are a bit shocked to see just how terrible the future looks. Black and the group sense each other and prepare for battle. Trunks notices the cat and screams for a Senzu: Mai is still alive! Trunks chews the Senzu and places it directly into Mai’s mouth. Goku is taken aback by the mouth-to-mouth action! Vegeta wonders if Goku has ever kissed before, to which Goku exclaims of course he has not. Vegeta presses the issue noting his marriage, but Goku wonders what that has to do with anything. Mai wakes up in shock to see Trunks, asking if he made it back to the past. Trunks has brought Goku and Vegeta to defeat Black! Recognizing Mai as the future version of the girl hanging around his house, Vegeta tells her and Trunks to stay back and let them handle Black. They may have to rely on Trunks in a pinch, but if he has to, he should escape back to the past in the time machine. Mai wonders if they can pull it off. Noting their strength, Trunks believes they may be only ones who can protect the world.

Black can sense that the two strong powers have moved, and wonders who they could be. Goku scouts out a desolate location, hoping to avoid further destruction. Black arrives, somewhat confused. Vegeta pipes up, demanding to go first, ready for the thrill of beating up someone who looks like Kakarrot! 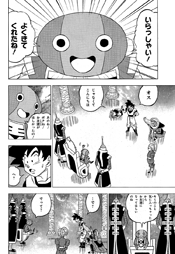 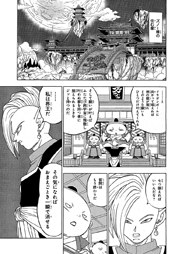 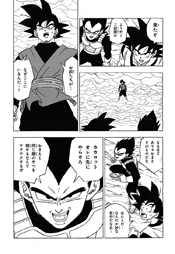