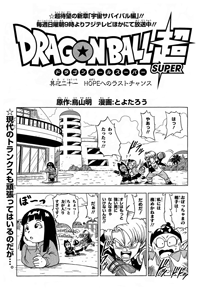 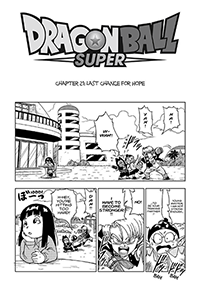 As the present-day Trunks “trains” with Pilaf and Shuu, Mai is snapped out of a daydream by the time machine’s reappearance… but only Goku and Vegeta (and the cat) come out. They unfortunately had to leave Trunks behind, but Goku will use this opportunity to learn the Mafūba. Goku believes they can travel right back to the exact instant they left, but Bulma explains that the machine is linked to the parallel future in general more than than a point in time, per se. Furthermore, it seems that the connection is weakening, so their next trip will be their last chance.

Kaiōshin abruptly gets up, though he explains he is simply going to visit Gowasu in Universe 10 to offer his condolences and support, as well as to fill him in on recent developments; Whis, however, does not appear to fully believe him. Beerus berates Goku and the others, saying he helped out with Zamasu in this timeline, but the rest is up to them. Goku wonders what the future Whis would be doing, but Whis explains that angels’ jobs are simply suspended in the event that their respective god dies, truly leaving them with no godly allies in the future timeline. Vegeta departs, refusing to use a technique like the Mafūba, determined to kill them in his own way regardless of Super Saiyan Rosé.

Back in the future timeline, Trunks continues to be pummeled by Black, smirking the whole time. Mai runs in to smack him, but Black retaliates with a kiai from the eyes to knock her away. Trunks takes this opportunity jump back with a Taiyō-ken, but Zamasu forces him to stop and dodge by throwing Trunks’ own sword at him. Trunks is still determined to put up a fight, while the two gods are equally determined to kill him. Black is ready to end this game, and though Mai still wants to help and tries to give Trunks his sword, Trunks yells for her to get as far away as possible. As Black prepares to fire his attack down on Trunks, Gowasu suddenly appears with Universe 7’s Kaiōshin, taking Trunks and Mai with them as they teleport away. Zamasu is confused, expecting them both to have already died off, but Black assumes they must be past versions of these gods.

Trunks is shocked to see Kaiōshin, who was apparently waiting for just the right opportunity to help. They can travel with the help of the time rings, after all. Gowasu bows and profusely apologizes to Trunks, who himself is a bit taken aback that a god would be apologizing to him. Here in the future Kaiōshin realm — where no-one lives anymore courtesy of Zamasu’s slaughter — they can at least stay hidden until Goku and Vegeta return.

Kame-sen’nin, the Turtle Sage, watches as Goku practices the Mafūba, which he himself learned from his own master. Goku is having trouble mastering the technique, which the sage notes is because Goku is approaching it too roughly, causing him to miss the jar. Goku asks for him to just come seal away Zamasu himself, but is told that the technique requires great strength and can even kill you. Goku is too wrapped up in his own head to hear the full story, and so the Turtle Sage wanders back inside to make the necessarily charm.

Back in the future timeline, Black and Zamasu discuss what their next course of action should be. If the various Kaiōshin know of their plan, they could potentially tattle to Zen’ō (the “King of All”) on them. Perhaps they should leave Earth… but maybe only after killing a few more humans…

Kaiōshin watches over Trunks and Mai as they sleep, wishing Kibito were around to help heal them. Gowasu observes how said healing power was meant to assist them as the lords of worlds, and yet here was this same power now being used for evil deeds; perhaps the extent of their power should be limited going forward? The two gods suddenly realize that Black and Zamasu have begun exterminating the rest of humanity. Gowasu is determined to take responsibility for Zamasu, and despite Kaiōshin’s plea, he departs for Earth. As Black and Zamasu come across another building with survivors, Gowasu arrives to question his alternate-timeline apprentice. The two argue over the meaning of a peaceful world, and how these humans contribute to and simultaneously destroy this vision. Gowasu continues to appeal to Zamasu, but it is no use. Kaiōshin, Trunks, and Mai then also arrive to stop Zamasu from interrupting Gowasu and Black’s conversation.

Gowasu extends a hand to Black… who slips by it to stab Gowasu through the chest, noting how this is now the third time he has killed Gowasu (his own master, the future Zamasu’s master, and now this Gowasu from the alternate past). As Gowasu’s body tumbles down, Vegeta emerges from the Room of Spirit and Time, while Goku has seemingly perfected the Mafūba. 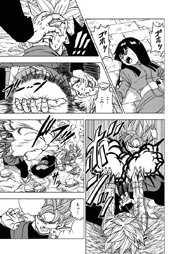 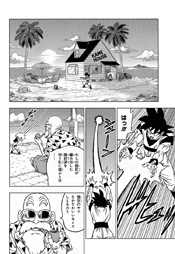 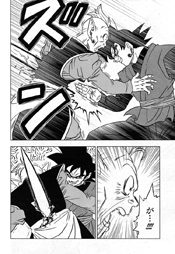