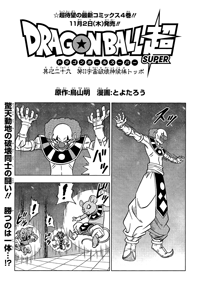 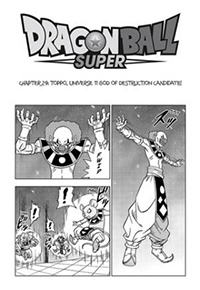 Vermoud catches the other gods in a series of bubbles, but Liquir is able to jump in and deflect the incoming attack, only to himself be caught off-guard by Helles. The Omni-Kings are having difficulty keeping up with the action. Rumoosh freezes everyone in their tracks with a great roar and runs in to attack. At this point, even Goku is having a difficult time making sense of the ridiculous power and insanity of the match.

The gods continue their assault against each other, but the Omni-Kings have had enough of not being able to follow anything. The Great Priest appears in the ring, stopping Beerus and Quitela from punching each other simply by raising a finger against each incoming fist. The match is cancelled! Vermoud lifts his head from the ground with a grin.

The Omni-Kings consider throwing out the entire idea of a tournament, but Goku appeals for them to reconsider; after all, their fights will not quite be at the level of the Gods of Destruction. The Omni-Kings would like a demonstration, and with Toppo here from Universe 11, they have a perfect opportunity to show off. In order to reign things in even further, the Great Priest announces that flying, weapons, and killing will all be prohibited, and the first person to touch the outside of the ring will be the loser.

Whis is questioned by the Universe 8 angel Korn about Goku’s manners toward the Omni-Kings, but Whis explains that Goku actually helped him once, and so there is a familiarity between them.

Toppo asks whether Goku is also a God of Destruction candidate, but Goku responds that he has no interest in that and simply wants to get stronger. As the fight begins, Goku rushes in as regular Super Saiyan; Beerus and Whis figure Goku is going to conserve his energy and observe for the time being. With no attacks landing, Toppo asks for Goku to get serious. The future Omni-King is impressed by Goku’s transformations; the present Omni-King says that Goku has even more in store for them! The Great Priest asks Whis how many transformations Goku has. The Omni-Kings would like to see Super Saiyan, Super Saiyan 2, Super Saiyan 3, Super Saiyan God, and Super Saiyan Blue! There does not seem to be much of a change with Super Saiyan 2, so Goku is asked to ramp it up to Super Saiyan 3, which the Omni-Kings think looks scary and fun! Goku is still unable to land anything against Toppo, who finally responds with impressive speed and punches of his own.

Goku is forced to ramp things up again, this time to Super Saiyan God, which even the Gods of Destruction and Toppo acknowledge as having the feeling of a true god. As Toppo fires, Goku instinctively jumps up to fly away, but is quickly reminded that this is prohibited. Taking the hit, it looks as if Goku will fall out of the ring, but he is able to grab the edge at the last moment to flip himself back in. Beerus yells for Goku to turn Super Saiyan Blue and finish the match, but as Goku transforms and pulls back a punch, Toppo lands a massive kick squarely up into Goku’s stomach, launching him up and out of the ring. Toppo has won!

Goku is impressed with Toppo’s power, but he is only the second-strongest from Universe 11. Even Toppo has a long way to go to reach Jiren, who is even stronger than their God of Destruction, Vermoud…! 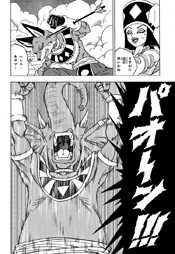 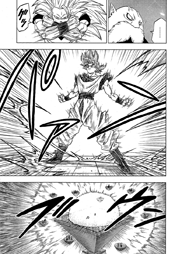 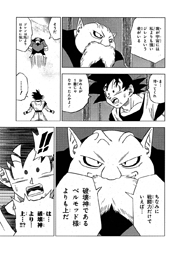