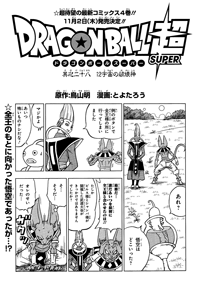 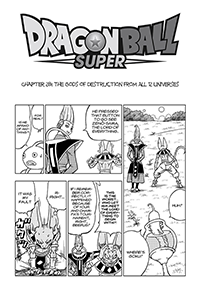 The 12 Gods of Destruction

Goku has disappeared, off to visit with the Omni-King to discuss an inter-universal tournament. Beerus seemingly accepts responsibility for this horrible situation, with his and Champa’s previous Universe 6 vs. 7 tournament being the cause for the Omni-King’s notice.

The future and present Omni-Kings appear to be playing a sort of chess game against each other, but stop to inquire with the Great Priest about the mortal levels in the various universes. Universe 11 is in the lead as expected, with Universe 12 following. There has not been much change with the others, who in fact all may have actually decreased slightly. The Omni-Kings see no reason to keep all 12, and are losing interest in observing them. They collectively decide to keep just four universes and erase the other eight. The Great Priest agrees, and asks that the guide angels from those universes be withdrawn.

Just then, Goku arrives! The Great Priest can tell that Goku would like to ask a favor. Goku says that he does not remember which one he promised, but they had talked about the inter-universal tournament and wants to know how that planning is going. The respective Omni-King has apparently forgotten, but they should do that soon! The Great Priest says they should give the universes time to prepare; five “tiks” from now should be sufficient (roughly 40 hours in Earth time). Goku figures he should run off and get prepared as soon as possible, but the Great Priest informs Goku that he must wait while he informs the other Gods of Destruction. Using his staff, the Great Priest calls out to all of the guide angels.

Various Gods of Destruction tune in to the message, including Gowasu from Universe 10, who is in the process of being chewed out over the Zamasu situation by his God of Destruction. One God of Destruction in particular, Vermoud, is surrounded by a harem of ladies, noting that today marks 87,910,715 days since he became a God of Destruction. As his angel attempts to inform him of the Great Priest’s call, one of the women get angry and pulls a knife on the angel. The woman is destroyed by Vermoud, who notes he was going to destroy the entire planet, anyway.

The Great Priest calls all of the angels, Gods of Destruction, and Kaiōshin of the respective universes to the Omni-King’s palace. Other than the Kaiōshin from Universe 8 who has just entered the bathroom, the others are all ready to arrive. Each of the various gods appear, forming kneeling lines on either side of the room. Universe 11’s God of Destruction, Vermoud, has brought an additional attendee with him: Toppo, a warrior that is also a candidate for God of Destruction upon Vermoud’s upcoming retirement. Universe 8’s group of gods arrive, completing the audience.

The Great Priest informs everyone that in five tiks (157 o’clock on day 3,135,500,603 of the king calendar), they shall hold a “Tournament of Power” with competitors from each universe. Universe 3’s seemingly-robotic God of Destruction appears to be concerned over having such little time to prepare, but when one of the Omni-Kings question this being an issue, the universe’s angel quickly fibs to say that Mosco, the God of Destruction, believes it is wonderful that they can participate so soon.

The present-day Omni-King points to the future Omni-King, saying that he does not know anything about what is going on. The Great Priest advises that they hold a “Zen Exhibition Match”, and quickly creates a tournament arena, inviting all of the Gods of Destruction to enter the stage. As the Gods all showcase signs of shock and hesitation, one of the Omni-Kings bluntly tells them to hurry up. The Great Priest explains that all are to give it their all during the fight or face erasure at the hands of the Omni-Kings. Beerus gets into a spat with Quitela, the God of Destruction from Universe 4, who apparently beat him in an arm wrestling contest once before. Goku cheers on Beerus, who chastises him as the one responsible for this mess. Upon hearing this, the other Gods of Destruction all turn their attention to Beerus.

Whis explains to Goku and their Kaiōshin that, long ago, they once held an inter-universal game of hide and seek at the behest of the Omni-King. The game was unfortunately cancelled because Beerus fell asleep for 50 years after hiding. The Omni-King became furious, and the other universes all had to placate him to avoid his outrage and possible erasure. As such, they have all held a grudge against Beerus ever since.

As expected, all of the other Gods of Destruction attack Beerus as the fight begins. Beerus is able to dodge most of their attacks, with Whis commenting to Goku how his body can sense attacks and make the decision to dodge all on its own. Mosco ends up capturing Beerus between his hands, though Beerus breaks free before taking a kick from Quitela. Some of the other gods mistakenly attack Champa instead of Beerus, who takes the opportunity to fire a massive blast their way, though Sidra creates a barrier to protect them. Vermoud jumps in and quickly kicks Sidra away, noting how many openings there were to attack just then; after all, only one universe can be the winner! Both of the Omni-Kings, along with Goku, all appear more and more excited over the prospect of the tournament. 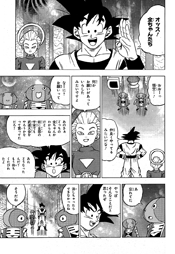 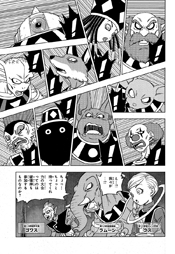 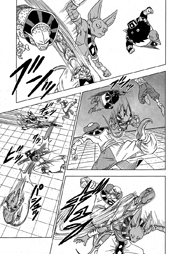