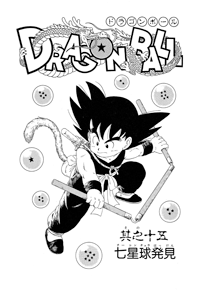 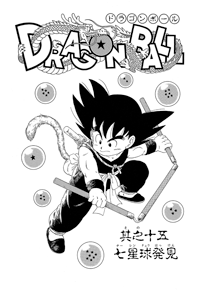 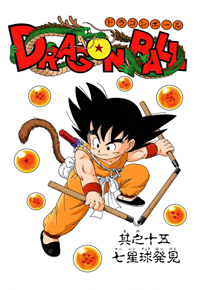 The Seven-Star Ball is Found

Oolong is annoyed with having to search through all the rubble for the Dragon Ball, but Bulma’s not worried because they have the Dragon Radar. Gyūmaō is happy about the fire being out, but Kame-Sen’nin feels bad about blowing up his castle. Yamcha can’t believe how powerful Muten Rōshi is. Goku asks Kame-Sen’nin if he can teach him to do that. Kame-Sen’nin says it took him fifty years of training to master the Kamehameha. Goku tries counting that on his fingers, and while Kame-Sen’nin talks to Gyūmaō and Chi-Chi, Goku manages to perform a small Kamehameha, blowing up their car. However, he’s disappointed that it’s not as great as the one Kame-Sen’nin did.

Gyūmaō is amazed, but would expect this from Gohan-san‘s grandson. Now Kame-Sen’nin understands, and recalls that he’d heard Gohan had found and raised a child with a tail. He goes to ask Goku about Gohan, and Goku says he’s dead. Kame-Sen’nin then offers to train Goku, and Goku happily accepts; he’ll go as soon as he’s done finding all the Dragon Balls. Yamcha is amazed, since it’s so rare to be taken in as one of Muten Rōshi’s student.

After sifting through some rocks, Bulma finally finds the Seven-Star Ball. She’s happy until she notices that Goku has blown up their car. Gyūmaō says not to worry, though, and gives them a capsule with a new car. Bulma checks the Dragon Radar, and the last Dragon Ball is to the west. They prepare to leave, until Kame-Sen’nin asks her if she’s forgotten something. Bulma then pulls Oolong aside, and says to turn into her and take her place, otherwise… Oolong reluctantly agrees, and after getting it very wrong, he goes over to Kame-Sen’nin. He starts flirting with him, and the real Bulma starts to get pissed. Oolong keeps teasing him about pafu-pafu, finally drops the top, and Kame-Sen’nin’s nose explodes. Bulma yells at Oolong and hits him on the head after the deal is done.

Goku, meanwhile, is sitting in the backseat of the car. Chi-Chi begins saying that when she’s older, she wants him to come back so she can give him herself as his wife. Goku doesn’t understand, but if she’ll give him something, he’ll come back for it. Bulma and Oolong finally get in the car and they all say thanks and goodbye. This car is much faster than the FIAT 695 and as Yamcha and Pu’er continue to follow, Yamcha tells Pu’er to get the Silver Star Model 4 out so they can keep up. 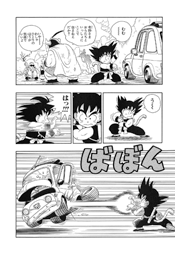 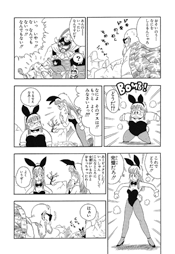 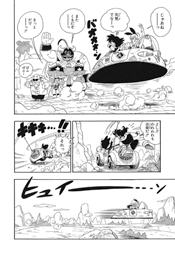