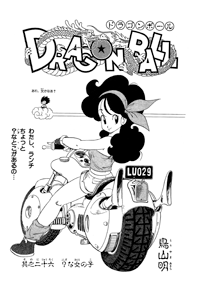 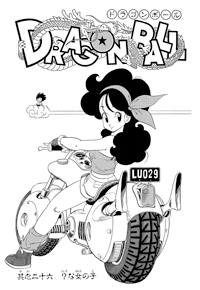 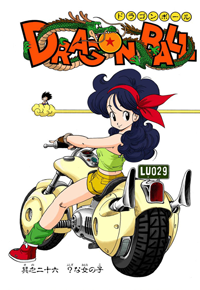 Kuririn is struggling to hold onto Goku’s back while they fly around on Kinto-Un, and Goku spots a farmer. Kuririn yells at him that it’s a man, and Goku’s impressed he can tell the difference between men and women just by looking. Kuririn can’t believe he doesn’t know, and Goku tells him he can tell if he feels if they have a weewee or not. So Kuririn assures Goku that he himself is a man and he doesn’t need to feel him.

A light-haired girl on a bike, with a bag full of money, is being chased through a canyon by some policemen who are shooting at her and yelling to stop. She throws a grenade back at one car, blowing it up, but the second car keeps chasing. The girl goes up the side of the canyon on her bike, and comes down the other side into another canyon area. The police car keeps chasing her by going around. Then the girl pulls out a shotgun, and prepares to fire it back at them, until some of her hair tickles her nose and she sneezes. She falls off of her bike, and her hair has changed to a darker color.

Goku and Kuririn are now flying over this area, and Goku says there’s no one here. The policemen call her “Lunch”, and prepare to apprehend her, but she has no idea what’s going on. Lunch then yells for help, and Goku and Kuririn hear her. Goku wonders if they should help her. Kuririn says it would be really good to help her, but they’re probably not skilled enough, and those guys have guns… Goku says if they should help, they will, and dives down into the canyon. Goku tells the policemen he’s here to help the girl, while Kuririn runs and hides, since it has nothing to do with him. One of the policemen tells this kid he’ll arrest him if he interferes, so Goku punches the gun out of his hand, and kicks him, knocking him out. Goku then leaps over and head butts the other policeman in the face, knocking him out, too. Lunch thanks him, and wants to know how she can repay him. Goku asks Kuririn if “Gramps” will like her, and then the three of them take off on Kinto-Un, with Lunch wondering where they’re going. 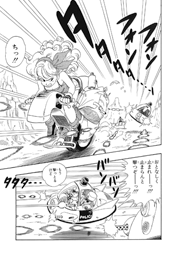 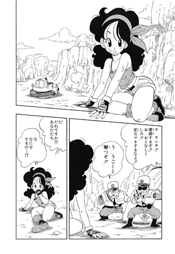 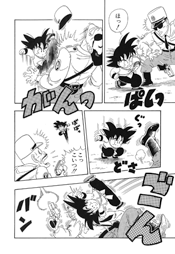