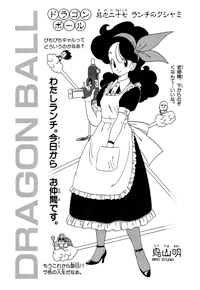 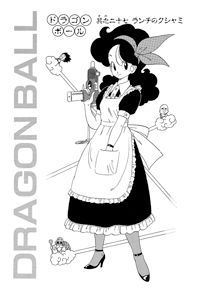 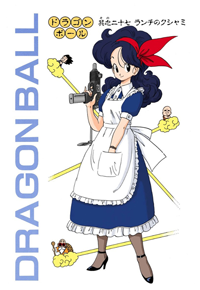 Goku explains to Lunch that they’re going to Kame-Sen’nin’s house, while Kuririn is enjoying sitting behind her. They arrive, and Goku gets off Kinto-Un and stands on the porch. He yells that they’ve brought a pichi-pichi gal, but there’s no answer. Kuririn says he might be using the restroom, but Goku doesn’t know what that means. Kuririn whispers that he means the “toilet”, and Goku realizes Gramps is “taking a crap”. So he decides to go tell him to hurry up. Goku runs in the house screaming, “Heeeeey, Gramps, are you on the toilet!?”, and Kuririn apologizes to Lunch for Goku’s vulgarity. Lunch asks Kuririn why she’s here, and he basically says just to hang out with this man for a while. She’s happy to help, and then Kuririn asks her why those police-looking guys where chasing her. She says they were real police.

Goku continues to yell at Kame-Sen’nin, telling him that brought back a girl. Kame-Sen’nin says he’s finished, then comes out and yells at Goku for yelling like that. Back outside, Kuririn asks Lunch why the police were chasing her, and she looks at her bag full of money, and wonders if she robbed a bank again. Kame-Sen’nin is at the window, and Goku assures him they brought a good girl back this time, Kuririn said so. Kame-Sen’nin looks out at her, and she wonders if it wasn’t maybe a train robbery, and Kuririn thinks she must be joking (probably just a rich girl). Kame-Sen’nin stares her down, as she tells Kuririn that they should be careful because when she sneezes, her personality…

Kame-Sen’nin sticks his head out of the window and screams, scaring her, and then he tells Goku they did good this time. Kuririn comes inside, and Kame-Sen’nin says he’ll have them as his students. The three of them go back outside, and Kame-Sen’nin greets her. She says her name is Lunch, and explains that his grandsons helped her. Kame-Sen’nin says they’re not his grandkids, but his younger brothers, and everyone falls over. He introduces himself as Muten Rōshi, also called Kame-Sen’nin, and says how he’s going to teach them martial arts. She realizes that’s the reason the boys are so strong, and Kame-Sen’nin agrees that he must’ve taught them well. Goku says they haven’t learned anything from him yet. Then Kame-Sen’nin asks if Lunch wouldn’t like to take a bath… err, live here for a while, and she says sure, so long as she doesn’t get in their way. Kame-Sen’nin does a happy dance.

Lunch comes out of the house in lingerie, and thinks this seems like underwear. Kame-Sen’nin says it’s the Kame-sen style’s dōgi (“undergarment”), as he and the boys are also wearing the lingerie now, and she falls over. Then he wants to start training, but a horsefly comes over and flies in front of him. It flies under Lunch’s nose, tickling it, and she yells for them to run away just before she sneezes. Lunch turns into the blonde-haired girl again, and wonders where she is. Oh well, she pulls out a machine gun anyway and starts firing at the boys, until she sneezes again. She’s turned back into the good Lunch again, and she apologizes to the bullet-filled boys and explains how she changes personalities every time she sneezes. She hopes she didn’t do anything bad, but Kame-Sen’nin says “not really…”. 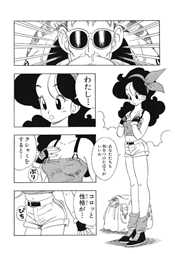 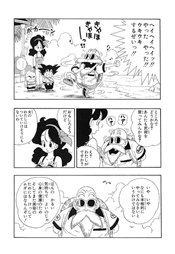 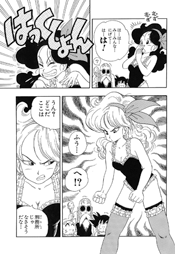