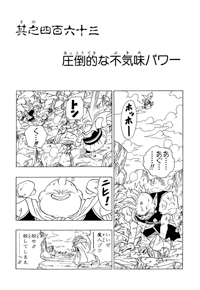 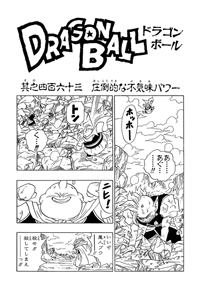 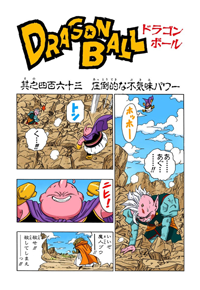 Boo lands on the ground next to the now tattered Kaiōshin, and Bobbidi tells him to kill him. Kaiōshin tries using his telekinetic powers again, but Boo resists and does something similar, although his sends Kaiōshin flying across the ground. Boo flies after him and lands sitting right on Kaiōshin’s back. Bobbidi taunts Kaiōshin, and thinks he’ll deliver the finish himself. Gohan suddenly flies in and kicks Boo in the face, making Boo cartwheel off to the side. Gohan’s footprint is stuck in Boo’s face, but he simply pops it back out and his face returns to normal. Gohan can’t believe he isn’t reacting to the damage at all. Boo says, “You’re in the way. Get lost!” Gohan readies a punch, but Boo fires a huge ki ball that pushes Gohan off into the distance. Kaiōshin telekinetically makes the blast explode, and Gohan starts falling back down to the ground.

Kaiōshin begs Gohan to stay alive, and Bobbidi asks him if he did something just now. Gohan lands in a forest, out cold. Bobbidi tells Boo he can finish off Kaiōshin now. Boo says he’s hungry, and wants to eat him. Suddenly, a spear flies through Boo’s back, piercing him all the way through his stomach. It’s Dabra, and Bobbidi asks him what he’s doing. Trunks and Goten are nearby, so they land on a mountain and return to normal to hide their ki. They try to figure out who’s who, recognizing Kaiōshin as the weird guy from the Budōkai. But then Goten spots the Piccolo’s stone figure, so the boys go over to it to investigate. Trunks begins knocking on it a little, when Piccolo tips over and shatters. The boys freak out and run away.

Meanwhile, Dabra insists that Majin Boo can’t be controlled and won’t be a faithful servant, but Bobbidi is insulted he’d speak that way about his Majin Boo. Boo pulls out the spear, and the hole it left in his belly quickly heals up. Boo tells Dabra, “I’m gonna eat you up…” 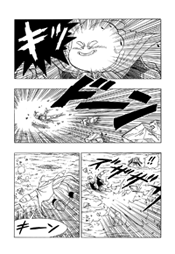 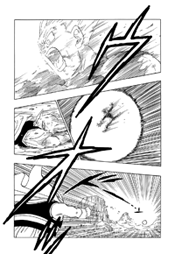 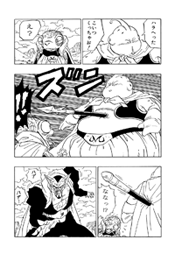