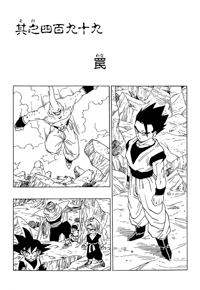 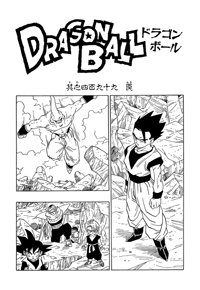 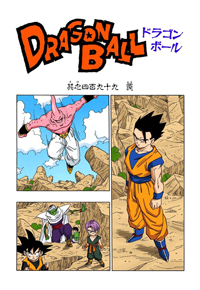 Boo lands and smirks, as Gohan thinks nothing seems to have changed. Trunks thinks Boo will just run away again. Boo looks over and yells that he wants to fight the youngsters again. Gohan refuses, saying he is Boo’s opponent, but Boo insists that he wants to settle the score with them before fighting Gohan. Gohan wonders why, but Boo ignores him and accuses the boys of being too scared. Trunks and Goten each say that they’re not, and Piccolo thinks something weird is going on. Trunks tells Piccolo that Boo is too stupid to have any sort of plan… The two then quickly perform Fusion. Gotenks starts off in his Super Saiyan 3 form, calling himself Super Gotenks, the death god of justice. Boo thinks to himself, “With the youngster’s power… and that Piccolo guy’s brains…” Gotenks flies over next to Gohan, and him to let him fight. Boo oozes a little bit of his back off into two blobs, and the blobs slide across the ground unnoticed.

As Gotenks prepares to fight, one blob envelops him, while the other blob takes Piccolo. With a flick of his finger, Boo brings the two blobs back to him. As he absorbs them into his body, he begins to transform. Goku wants Gohan to hurry and kill him now, but Boo’s transformation is over before Gohan can react. Boo lets out a sigh and looks down at Gohan with a devilish grin. His forelock is now elongated, extending down to his knees, similar to that of a Super Saiyan 3’s hair, and he is wearing Gotenks’ vest. Boo thinks aloud that this is truly the birth of the strongest majin. Gohan can’t believe this, but Boo says it’s all Gohan’s fault for getting stronger. He felt Gohan’s existence from far away, and thought that he might be stronger, so he started planning. His suspicions were confirmed when they fought, which was when he realized he’d be the strongest if he absorbed Super Gotenks. But, since his power had a time limit, Boo decided to wait until the next chance. Gohan says Boo’s stupidity still hasn’t changed, as it would’ve been smarter to just absorb him. Boo realizes Gohan doesn’t get it. “What would be the point of being the strongest if there’s no one to fight? Didn’t the previous Majin Boo say it? That I would kill you, for certain? That is my greatest motivation…” Gohan smiles, saying he gets it now. 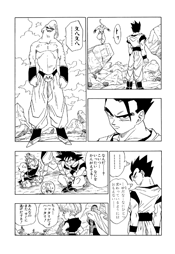 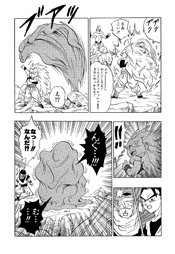 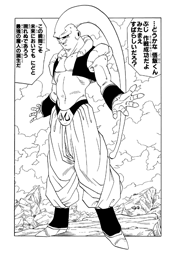