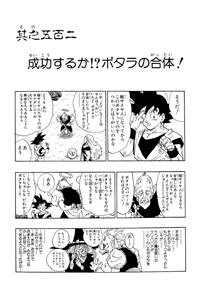 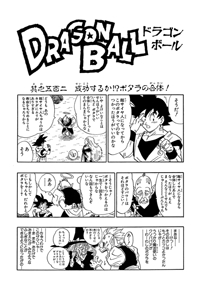 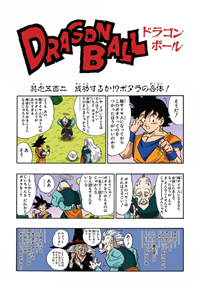 Is This Gonna Work?! The Potara Fusion!

Goku suddenly stops and asks if they should be Super Saiyan first. Old Kaiōshin says there’s no point, they can do it afterwards. Besides, the stress would be too much for their body and shorten their lifespan. You can only use the Potara once in your life, though. Goku asks if him if he has ever used them. He explains that an ugly old witch once took one to try to be a pretty gal, and this is why he’s able to do these mysterious things. Kaiōshin interrupts them, saying there’s no time for talking. Goku agrees, and quickly teleports away.

Boo prepares to launch his attack, while Gohan, Tenshinhan, and Dende are all watch on in shock. Satan on the other hand closes his eyes and fires his gun, apologizing to Majin Boo. Goku suddenly appears behind Boo, and throws a Kienzan, cutting Boo in half and slicing off the end of his forelock. Gohan wonders how his father was able to come back to the living world. Satan opens his eyes, and thinks he’s cut Boo’s body all up with that shot. Boo’s upper body recognizes Goku as the guy with all the weird transformations. Boo says it’s no use if he’s come to help. Goku grins and very confidently tells Boo he’s wrong, because he has an incredible power up item this time. Boo’s lower body, which landed on the ground behind Tenshinhan, stand back up and kick Tenshinhan hard, knocking him out. Boo’s lower and upper body reunite, and Boo smugly comments that while that guy seemed like quite an expert, he was still just a small fry that was taken out with a mere kick. The rest of them are all small fries too. Goku asks why he’d bother restoring himself if that was really the case.

Boo thinks Goku must really want to die. Goku yells over to Gohan and tosses the other Potara at him, but Gohan wasn’t paying attention and misses it. The earring falls in-between some nearby rocks and Goku tells him to hurry and find it, then put it on his right ear so they can fuse and defeat Boo. However, Boo thinks that would still be useless, but he won’t allow them to fuse anyway. First he’ll kill Goku, but Goku begs him to wait as Gohan searches through the rocks. Boo rushes at Goku, and so he becomes Super Saiyan 3 and prepares to fight. Boo then suddenly stops mid-air, just as Gohan finds the Potara. Boo begins transforming again, until he starts to resemble Piccolo. Goku laughs, thinking it’s because Piccolo is now the strongest one inside Boo, since the youngsters have defused. Goku powers down, disappointed that now Gohan alone can defeat Boo like this.

Boo smirks and says he had an insurance plan, just in case of this. Goku wonders what he means, and Boo points to his forelock that he didn’t bother to restore. The severed piece down on the ground then turns into a blob and suddenly envelops Gohan. The Potara drops to the ground, and Goku flies over and grabs it as Boo begins to transform again. The Kaiōshin think it’s all over now, as Boo is now wearing Gohan’s dōgi. Goku frantically starts looking around. “I was gonna fuse with Gohan… There ain’t no way around it!! Who else could I fuse with… Tenshinhan’s down… Dende ain’t a fighter… Mi-Mister Satan…?!” 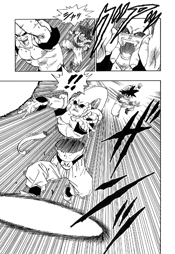 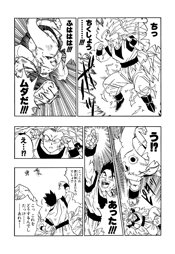 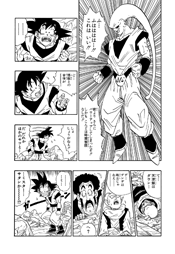