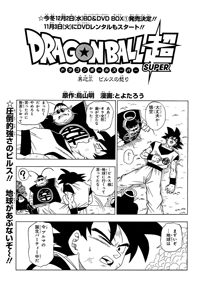 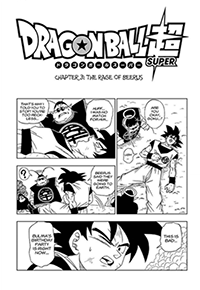 As Goku lays in pain on the ground, Kaiō asks if he is all right. Goku thinks so, but admits he really was no match for Beerus. Kaiō says that is an understatement, which is why he told him to stop, but of course that is not in Goku’s nature. Goku sits up, remembering that Beerus mentioned something about heading to Earth.

Back on Earth, Bulma’s cruise-ship-birthday-party has been interrupted by Beerus, who has stopped by to inquire about this supposed “Super Saiyan God”. Boo had apparently eaten all the pudding, leading Beerus to take out his frustration on the attendees. Gohan and Boo are already down for the count, so Gotenks powers-up to Super Saiyan 3… though he is easily flicked aside. Piccolo starts to make his move, but Vegeta tells him not to bother. Vegeta has a flashback to a childhood memory of Beerus standing atop King Vegeta, who apologies for the Saiyans getting a bit full of themselves. Beerus chuckles at Vegeta’s well-informed introduction. Bulma walks up and slaps Beerus for ruining her party; Beerus responds in kind with a slap of his own. Vegeta powers-up in a rage of emotion, launching himself forward with a barrage of attacks. While impressive in their own right, Vegeta’s attacks are ultimately nothing against Beerus.

Meanwhile, the Elder Kaiōshin picks up on another planet disappearing, despite the fact that they are watching Beerus on Earth at that very moment. The two Kaiōshin tune in with their crystal ball and come across the duo in space in search of some particular “wish orbs”; the attendant notes that they should move on before they are noticed. As the Kaiōshin make the connection with the “wish orbs” and the Dragon Balls, the duo turn around to glare back through the crystal ball straight back at the Kaiōshin. “Champa” and his attendant say hello to the “Kaiōshin of Universe 7” before grilling them on how much they overheard. The Kaiōshin pretend to have not heard anything at all; Champa does not seem fully convinced, but takes off with his attendant anyway. The Kaiōshin begin to panic a bit, believing Champa to be referring to the Dragon Balls on Planet Namek.

Just as Vegeta concedes defeat to Beerus, who intends on destroying Earth, Goku arrives with a request: could he please hang on just a little bit longer? 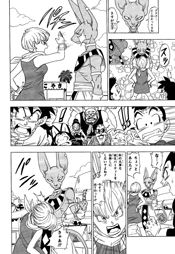 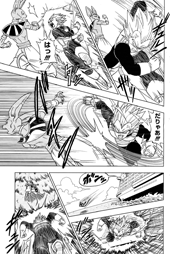 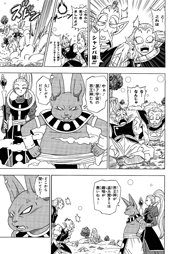