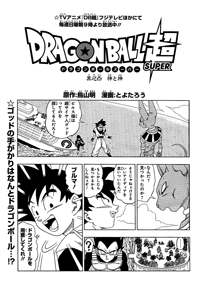 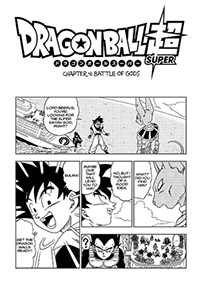 Since Beerus is looking for Super Saiyan God but none of the Earthlings have a clue, Goku has an idea: ask Shenlong! The dragon explains that “Super Saiyan God” is something created when six Saiyans with pure hearts work together. Unfortunately, there are only five Saiyans on Earth (Goku, Gohan, Goten, Vegeta, and Trunks). Surprisingly, Videl is pregnant with her and Gohan’s child; with her cooperation, the group is able to bring Goku forth as a Super Saiyan God!

Beerus seems moderately impressed, even as Goku’s friends and family seem a bit confused. Gohan is unable to sense his father’s ki, proving that he has indeed become a god. Goku makes Beerus promise not to destroy the Earth if he wins the fight; Beerus agrees, but anticipates winning handily.

As the two fight, Beerus asks Goku how it feels to have the power of a god. Goku is shocked at the power, but still cannot manage to lay a hand on Beerus, who reiterates that the battle’s conclusion is already decided. The two connect with a punch, sending shockwaves that can be felt all the way in the Kaiōshin realm. The younger Kaiōshin has collected the Namekian Dragon Balls, though it seems these were not the ones Champa was after anyway; he is already off to some other distant location.

Above the Earth, Goku and Beerus continue their battle. Beerus is losing patience, and though the fight has been enjoyable, it is time to put an end to things. The God of Destruction tosses a massive attack toward Goku and the Earth behind him; Goku smirks and remarks that the power of Super Saiyan God is telling him that he has only scratched the surface of what is possible! Goku launches a Kamehameha to negate the attack. Whis teleports up to the battle space, remarking that they should perhaps consider the match done for now. Beerus will leave — including leaving Earth intact! — so long as Goku pushes himself even more. Furthermore, he should know that Beerus is the God of Destruction of this universe, the seventh of twelve in total. There are surely stronger folks out there… including Whis, who is Beerus’ master! Beerus and Whis depart, leaving a smiling Goku behind.

Elsewhere in space, a group of aliens working under the leadership of “Guarana” have come across a gigantic Dragon Ball. They attempt to contact headquarters, but notice Champa and his attendant outside their ship. With a smile, Champa fires a blast, destroying all trace of the aliens.

Another alien relates to “Sorbet” that their scout ship has been destroyed. With so many of their force being taken out, at this rate they will have no choice but to revive Lord Freeza himself! Sorbet exclaims that they absolutely must find a planet with Dragon Balls!

Champa’s attendant warns him that creating such displays will only lead to Beerus finally noticing them. Champa agrees to head home… but next time they meet, Champa will have a surprise for him…! 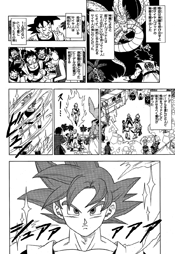 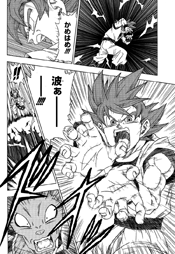 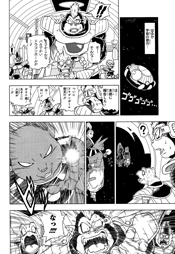