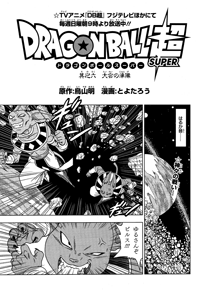 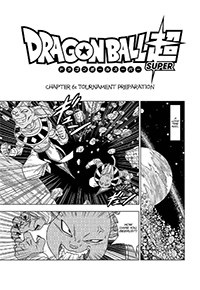 Preparations for the Tournament

Long ago, Beerus and Champa brawl with each other. As Beerus dodges and knocks back explosions, planets are caught in the destruction. The two land on a destroyed planet, and Champa lets loose his frustration over Beerus eating the “Puff-Puff Fruit” atop their birthday cake. Vados comments that she thought she was doing something nice by preparing the cake, and just laughs as Whis comments that she should have known it would end up this way. Beerus and Champa continue to argue over their respective universe’s food quality. Increasingly frustrated, Champa decides he has had enough. No longer caring what happens to this universe, Champa begins to power up a blast; Beerus responds in kind. Whis and Vados chop their respective cat to the neck, putting an end to the fight, along with suggesting that the duo fight it out with food showdowns, instead.

Back in the present, Whis continues to explain to Vegeta about the on-going food showdowns, and that it seems Champa’s pride has been hurt this time around. Champa and Beerus negotiate the terms of their new battle: five warriors of their own selection, with the end goal of Champa switching Earths between universes with the “Wish Orbs” he has obtained… though he only has six so far, and will turn them over if his team loses. Goku recognizes these as Dragon Balls; Champa and Vados seem taken aback that Goku would know of them. Beerus laughs, saying they have those in their own universe as well. Champa asks if they are the Namekian ones (they are), and explains that the Namekian ones were shaved down long ago from the original “Wish Orbs” which are on an entirely different scale: a single one is the size of a planet! Due to their size and the ability to grant any wish, they might as well be called “Super Dragon Balls”…! Goku is eager to set up the battle, and so the group gets down to business.

The narrator explains that the setup will be the same as the Tenka’ichi Budōkai: contestants lose if they surrender or fall from the arena, killing is forbidden, weapons and performance-enhancing drugs are prohibited, and (per Vegeta’s suggestion, as he does not wish to fight brainless monsters) a simple written test will be conducted ahead of time. The matches will begin in one week’s time of the 8th Solar Calendar (five days in Earth-time) at 10:00 a.m. on the “Nameless Planet” which floats in neutral space.

Vados asks if Champa is ready to go through with the battle, as they will have to hand over the “Wish Orbs” should they lose. Champa is not the least bit worried, pointing to how Goku and Vegeta were moving around earlier; they are pushovers.

Goku and Vegeta take off their weighted clothing and get down to business with Beerus. Goku suggests Boo for a fighter, and then also Piccolo. Vegeta asks about Gohan, noting he is perhaps the one with the most potential. Goku disagrees, saying that Gohan just studies all the time these days and cannot even find his dōgi. Beerus has already decided on the fifth fighter, however. As he has explained before, Goku was the second-strongest fighter Beerus has ever come up against. Goku assumes Beerus was referring to Whis, but Whis cannot enter the fight (though Whis remains silent on this point). This excites Goku even more than before! Beerus tells them both to get back to Earth to have Bulma start looking for the seventh “Wish Orb” and make sure everyone is ready to go by the time the matches start. They absolutely cannot lose to Universe 6!

Goku and company pick up the new radar from Bulma at Capsule Corporation. There should be some of those “Wish Orbs” in this universe, but nothing is showing up on the radar. Bulma explains that they are at the edge of the universe, so it probably will not pick up on anything unless they move around and get closer to the center of the universe. Goku suggests asking Whis for help, but Bulma recommends someone else, noting there is no telling what Beerus and Whis may use them for. Bulma calls up her older sister Tights (much to Goku’s confusion) and asks a favor. Tights says “he” was just bragging about his new spaceship anyway, so “he” should be there on Earth in about 50 minutes or so.

Jaco arrives, whining that an elite patrolman should not be called for every little thing like this. Bulma asks Jaco if he can take them to the center of the universe. Jaco says even just one galaxy is ridiculously huge, and nobody could know how to get to the center of the universe… except maybe Lord Zuno. Jaco explains that “Zuno” is a weirdo who knows everything, such as being able to tell the style of underwear a total stranger is wearing. Bulma asks about the Super Dragon Balls; Jaco does not know anything about them, but reiterates that Zuno might. Bulma wants Jaco to take them there right now, but there is only room for one more person on the spaceship. Bulma says she is fine to go alone with Jaco. Vegeta warns him to not pull anything funny with Bulma, who smacks him when he just shakes his head in confusion/disgust/refusal. As Jaco and Bulma take off, Goku remarks how he and Vegeta both have such feisty wives, to which Vegeta remarks that it is the Saiyan blood in him. Piccolo finally understands…!

At the “Nameless Planet” (with six “Wish Orbs” seemingly hovering overhead), Champa remarks that the place needs some bathrooms, some shop stands… he supposes it will do for a stadium. Vados asks if Champa has already decided on his five contestants. Champa remarks that since the two at Beerus’ place were Saiyans, perhaps he better get some for his team, as well… 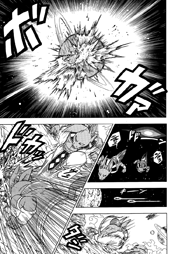 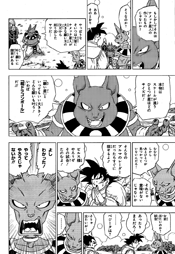 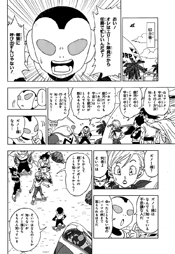