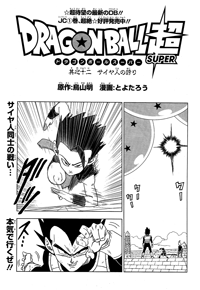 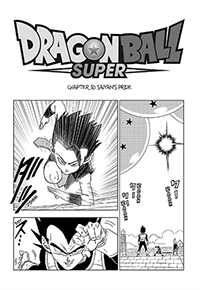 Cabba rushes in and manages to surprise Vegeta with a few good kicks. Vegeta regains his composure and lands a kick of his own to effectively reset the battle. Vegeta is impressed, but requests that Cabba turn into a Super Saiyan and come at him with his full strength. Cabba explains that he cannot do that, and in fact has never seen the transformation before Vegeta’s own demonstration. Cabba asks for Vegeta to teach this to him, which enrages him. Vegeta transforms into a Super Saiyan and dishes out an assault of physical and verbal attacks. As Vegeta threatens Cabba’s home world, he is pushed over the edge and transforms into a Super Saiyan. Cabba vows to protect them, and begins attacking Vegeta. After a few brief attacks, it becomes clear to Cabba that his was all a ruse to teach him how to transform. Vegeta has Cabba transform back into a Super Saiyan before showcasing his own next transformation: Super Saiyan Blue. As Hit finally takes an interest from the sidelines, Vegeta elbows Cabba to immediately end the match.

As Piccolo and Goku discuss Vegeta’s motivations, preparations begin for the next match: Vegeta vs. Hit! Vados has apparently promised Hit one of the cube spaceships in return for his winning participation, which Champa is not particularly pleased with.

Vegeta uses Super Saiyan Blue right from the start, but Hit does not so much as strike a fighting pose. Vegeta rushes in, but right in the moment where his hit should land, Hit is able to punch Vegeta in the face. The same thing happens again, this time with Hit kicking Vegeta away. Goku and the others are completely unable to see what Hit is doing. Is he using some sort of teleportation? Since killing is against the rules, Hit figures the fight is over; Vegeta is in no condition to continue fighting. The Galactic King wonders if Hit might be using some sort of time-skip technique, which could allow him to effectively stop time for everyone but himself, if only for a tenth of a second.

With Vegeta defeated, Goku is back up! Beerus is a bit worried and asks Whis for advice, who simply responds that there should be no concern with the actual strongest fighting in Universe 7, Monaka, still on tap! Alas, the truth comes out: Monaka is just a regular weakling that Beerus brought along to encourage Vegeta and Goku. Piccolo is seemingly the only one to pick up on this detail, however, meaning the entire tournament hinges on this next match.

Hit requests that Goku transform right from the start, but Goku replies that he still needs some time to figure out how to counter Hit’s technique and defeat him. Hit wonders if Goku is young and naive for laying it all out there like that; Goku is no spring chicken, but Hit is actually over 1,000 years old himself! The Kaiōshin from Universe 6 is shocked that Hit is so talkative; the Universe 7 elder Kaiōshin notes that it is just the sort of person Goku is to get that kind of response.

Goku tries an attack anyway, but the same thing happens with a punch to the face. Hit suggests that Goku just surrender now, but apparently that quick test gave Goku a hint…! 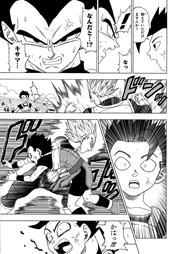 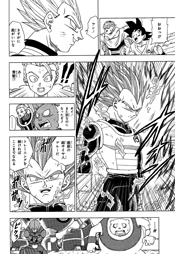 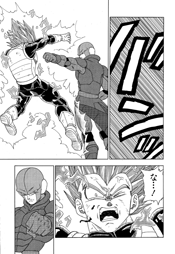