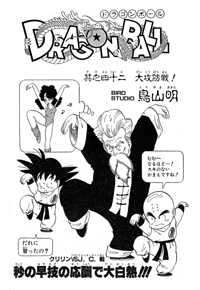 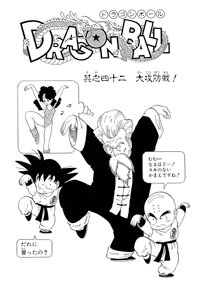 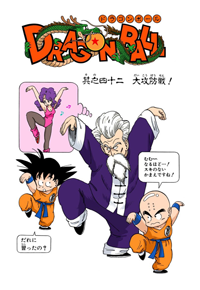 Kuririn (with a bloody nose, despite not having a nose) can’t believe his amazing speed, and Goku leans over the wall and tells him he could see the punch; try watching. So, Kuririn gets back up, and he and Jackie face each other, while Kuririn wonders if he really can see it. Then Jackie comes at him, and Kuririn sees him. Then something happens in the blink of an eye, and they break. The announcer didn’t see a thing, but Goku did. Jackie says it’s been a long time since someone could match his speed, and Kuririn says it’s only natural, as he’s a student of the amazing Muten Rōshi.

They come at each other again, and some stuff happens in a flash. Then they break, facing away from each other, and Kuririn falls down. The count starts, and Goku cheers him on, until Kuririn finally gets up at eight. The announcer then interrupts, and asks if they couldn’t explain what had happened a moment ago. So… they demonstrate (they slowly act out everything, while verbally explaining the whole thing; it’s hilarious!): Jackie and Kuririn walk towards each other, then Jackie kicks at Kuririn. But Kuririn ducks it, and punches at Jackie, but Jackie spits in his face and Kuririn pulls back. Jackie then comes at Kuririn with a left, but Kuririn blows snot at him (despite not having a nose…) and Jackie pulls back.

Jackie takes a moment to think, as does Kuririn. Then Jackie suggests Rock-Paper-Scissors, so they go, and scissors (Jackie) beats paper (Kuririn). The Jackie does the old “look over there”, and says he jumped while Kuririn’s head was turned. Jackie asks the announcer for some assistance with the “jump scene”, and the announcer picks him up, and Jackie kicks Kuririn in the back of the head, then lands with his back to Kuririn. Jackie is done, and Kuririn calls the announcer over. The kick to the back of the head had sent Kuririn flying, and he flipped through the air once (announcer has to flip him through the air), then Kuririn lands with his back to Jackie, and that’s when it ended, and he fell.

The announcer is very impressed with their speed, and then they resume the fight and face each other. Kuririn has a secret weapon he wants to try out, and he pulls a pair of panties out of his shirt and tosses it into the middle of the ring. Jackie goes for it, and Kuririn takes the opportunity to fly at him with a kick, sending Jackie flying. The announcer says that Kuririn’s victory seems certain. 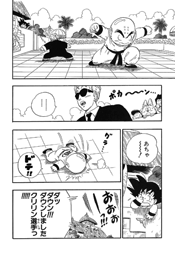 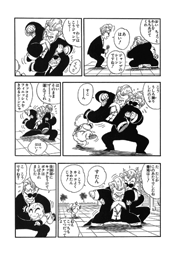 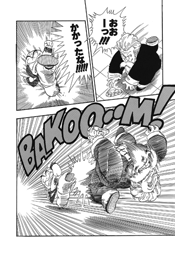