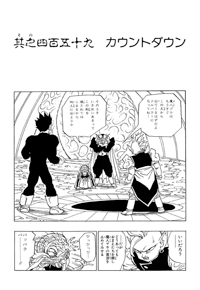 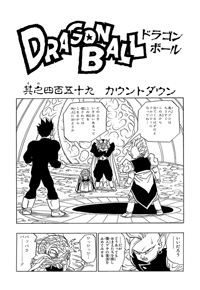 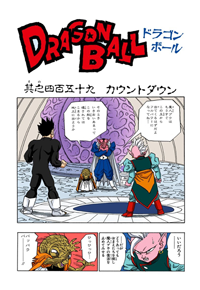 Bobbidi suggests they all return to the surface, as Majin Boo will soon be at full power and might destroy the ship when he emerges from his ball. Kaiōshin agrees, even though he won’t allow that to happen. “Papparapa!!” They are suddenly transported outside, along with Majin Boo’s ball. Bobbidi asks Dabra if he can defeat that Earthling, and Dabra says there is no doubt. Gohan remembers his father’s words and tries getting angry as he turns Super Saiyan. Bobbidi says he won’t be done in like Papa, as he has greater magic power than Papa and Dabra’s here this time. The meter on Majin Boo’s ball begins beeping, and Bobbidi looks down to see that it’s already full. Bobbidi is extremely elated with excitement.

Kaiōshin can’t believe Goku has already taken so much damage. Gohan realizes it must be because his father and Vegeta are likely both fighting at the level well beyond Super Saiyan, and so the damage must be incredible. Meanwhile, Goku takes a punch to the face, and then Vegeta takes a punch to the face. The two of them clash, and a cloud of smoke builds up around them. Trunks and Goten wonder if those incredible ki belong to their Papas. Trunks wonders what’s actually going on, since their locations keep changing.

Goku and Vegeta break, and catch their breath. Goku says they’re equals, and figures Vegeta has trained even more than he had. “No… You may think I had special training better than yours, but you’re a genius far greater than I. That difference has never changed. …I knew it. When you were fighting the monster that Bobbidi sent… It was a shock… So I secretly decided then…” Goku realizes it. “Yeah. People who knew the two henchman of Bobbidi’s at the Budōkai said they had gotten much stronger than before. I remembered that, and I thought it out. ‘If I were under his control, the difference with you would be gone’… That’s how it was. I resorted to something I didn’t like…”

Goku asks if the pride-filled Vegeta would really let himself be controlled just because he wanted to get strong? “I… I… I wanted to return to my former self!!!! I wanted to return to the cruel and cold-hearted Saiyan that didn’t care about anything, and fight you thoroughly!!!! I didn’t like it… Without realizing it, I was influenced by you all. I became calm… I even had a family… It didn’t feel bad. I grew to like this snug little Earth… S-So, I let Bobbidi control me. …I needed to return to my original evil self… Because of this, I now feel really good…” Goku wonders if that’s really true, as smoke starts to shoot up from Majin Boo’s ball. 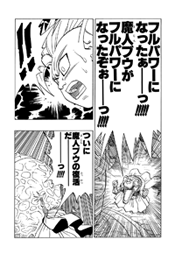 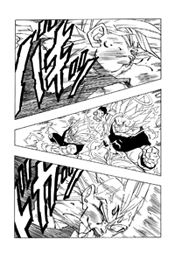 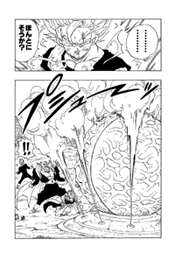